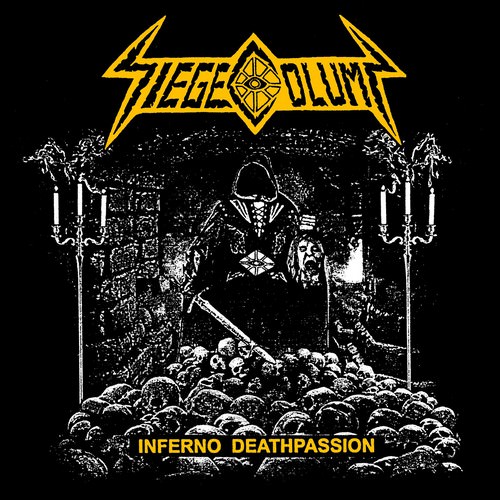 (Description by C. Conrad)
From the wastelands of New Jersey, Siege Column rears its ugly head to unleash its debut album, “Inferno Deathpassion.” With these nine death marches that blur the established norms that seek to categorize metal into various subgenres, Siege Column spits in the face of such conventional tendencies and instead harkens back to the days of yore when metal was defined more essentially by primal traits such as speed and ferocity. Whereas this horde’s preceding two demos served to sharpen the knives in its attack arsenal, “Inferno Deathpassion” represents the first offensive in an all-out assault that promises to raze any and all obstacles that lay in its path, be it willingly or otherwise.

2nd pressing of 250 copies all on yellow/black smoke vinyl with 3mm jacket and 12″ double sided insert.