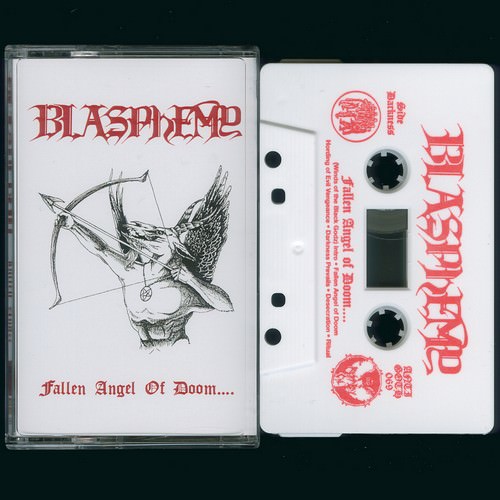 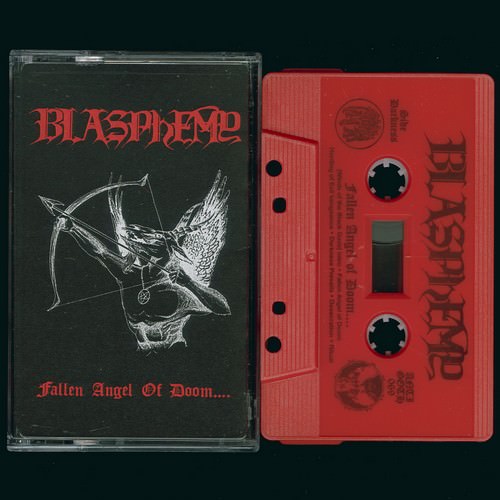 Available in white or black.

(Description by J. Campbell)
Following the success of Blasphemy’s “Blood Upon the Altar” demo, which was released in 1989 and ultimately sold more than 2,000 copies, Richard C. of Wild Rags contacted the band, offering them a contract for their debut album. In 1990, the Desecraters entered Fiasco Bros. studio to record “Fallen Angel of Doom” on a meager $2,000 budget. The lineup consisted of founding members Nocturnal Grave Desecrater and Black Winds on bass and vocals, 3 Black Hearts of Damnation and Impurity on drums, and guitarist Caller of the Storms. A second guitarist, Traditional Sodomizer of the Goddess of Perversity, also known for his work in Witches Hammer, was added to the lineup prior to the recording, after the band’s previous guitarist who following his adverse reaction to the theft and desecration of a gravestone in Ross Bay cemetery. Later that same year, the album was released—on red vinyl in North America and black vinyl in Europe—and immediately set a new standard of extremity in Black Metal. At the time, Blasphemy had few contemporaries; virtually no one had a style that was so immediate and forceful. Blasphemy drew upon the frenzied assault of death and speed metal, as well as early grindcore acts like Blood and Genocide, but augmented it with the unbridled evil of Sarcofago, Sodom, and Bathory, yielding a new virulent strain of Black Metal. The austere appearance of the album and the music on it, was much like the appearance of the band members depicted on the back cover: menacing, threatening, and violent. In the nearly three decades that have passed since its initial release, it remains unsurpassed.
The centrality of this album to the scene that evolved in its shadow cannot be overstated. As such, NWN! and Ross Bay Cult have endeavored to reissue it periodically, ensuring that it remains accessible. After having previously pressed the album in various color and picture disc variations, the labels sought to present this new edition consistent with the original pressing. Like the original version, it was manufactured in the U.S. on red and black vinyl, and the jacket and insert are similar to the first edition, with the notable exception that the lyrics to the songs “Hording of Evil Vengeance,” “Darkness Prevails,” and “The Desolate Ones,” originally omitted from the first pressing, have been included for this edition.

At the end of the 1980s and into the 1990s, there was a shift in the underground metal scene. So many bands seemed to be wimping out, going in new musical and lyrical directions. They were adding in socially-conscious messages and dressing like beach bums in colourful shorts, which sure didn’t speak to me. I was into black metal and death metal with satanic lyrics. I liked looking at the back of albums and at magazine promo photos and seeing band members in bullets and spikes with blood dripping out of their mouths! I got into this genre of music because all of the hatred and evil in the music and lyrics reflected the way that I lived my life. When some of my favourite bands started to forget their roots and instead started to attempt to please their record labels and the critics for the glossy magazines, I had to find something else. All it took was sending a couple of dollars down to Wild Rags! Records in California, and I was sent the latest edition of their mail order catalogue/magazine. This opened my eyes to an entire scene of black metal from all over the planet. These bands were all delivering different styles of black metal that seemed to be inspired from the regions that they came from. SAMAEL from Switzerland playing in the HELLHAMMER tradition, ROTTING CHRIST from Greece with their mystical atmosphere, MAYHEM from Norway, etc.—and most importantly in those pages well-advertised was the exact thing I was looking for to return me to my quest for the most brutal and satanic music possible: BLASPHEMY “Fallen Angel of Doom….”! Just from the looks of the cover artwork and the band photos I knew that I had to hear these guys! And to learn that they were Canadian?! Yes! Of course, I ordered this album without hesitation. Now the wait began.
In the meantime, I went to the local import record shop for my weekly search, and right there on the shelf was a copy of “Fallen Angel of Doom….”. I opened it up to look through the layout and I just couldn’t wait any longer to hear this album. I bought it right there and then and brought it home. The second copy I already ordered that was on its way from Wild Rags! ended up just being given away to one of my friends. Once I played the album I couldn’t believe the ferocity and desolate atmosphere of the music! The riffs! The vocals! The cavernous production! This is EXACTLY what I was expecting and more! This album was on constant rotation for me. In fact, I still listen to it a lot today. BLASPHEMY unleashed the embodiment of everything I thought black metal should be; pure Evil put to tape by obvious maniacs. They looked like barbaric, satanic lunatics that you would want to approach with caution, if at all! Convincing!
“Fallen Angel of Doom….” is a monument of black metal! This album inspired an entire genre upon its release. The owner of Wild Rags! Records, the notorious Richard C., phoned Black Winds when the album was released and told him excitedly that the album was selling so well that he was having trouble keeping it in stock! For the underground scene it made an impact that still resonates to this day. Bands from all around the world were inspired by BLASPHEMY as soon as “Fallen Angel of Doom….” was unleashed. Everywhere from Brazil to Singapore, Finland to Germany, bands were taking cue from BLASPHEMY and playing the most merciless forms of black metal, and waves of other bands over the years came into being thanks to BLASPHEMY, including my former bands CONQUEROR and DOMINI INFERI! Black metal hit the highest levels of extremity when BLASPHEMY released “Fallen Angel of Doom….” still unsurpassed to this day! It took everything known about the genre and made it even more savage and malevolent, both musically and visually. The way it should be!
As the Nocturnal Grave Desecrater and Black Winds predicted on this album; “The Cursed Soul Bred by the Fallen Angel of Doom will return!” And as predicted, Nuclear War Now! Productions and my own label, Ross Bay Cult, are able to present to you this masterpiece of desecration on LP, CD, and MC formats. Darkness Prevails! ALWAYS….

Posted on December 13th, 2018
Written by Insulter
Filed under Uncategorized