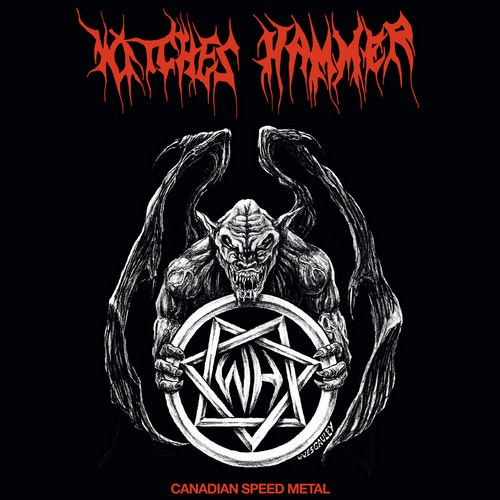 (Description by C. Conrad)
As a product of the storied extreme metal scene of British Columbia, Witches Hammer predated other bands from the area who later attained greater recognition and notoriety. Regardless of its more obscure status, this evil speed metal outfit laid the foundation upon which the infamous Ross Bay Cult would be built. The most likely reason for the band’s relatively low exposure is the fact that it never officially released a full-length album. That said, its recorded material demonstrates once again that the number of albums released is not the standard by which a band’s greatness can be measured. Formed in 1982 by a thirteen-year-old Marco Banco (guitars) and Alan Goddard (bass) under the original moniker of Oblivion, Witches Hammer was in fact the first extreme metal band to emerge from the Vancouver area. Approximately one year later, these two were joined by Ray Prizmic (aka Ray Crude) on vocals, and his brother, John, on drums. Several lineup changes occurred in the early years, but two core members, Marco and John, persevered throughout in writing and rehearsing songs. As the lineup stabilized, the band started to gain a reputation in the area as a result of its live performances at gigs shared with mostly punk and hardcore bands, due to the lack of extreme metal bands in the area.
In 1985, Witches Hammer recorded its first, self-titled demo at the famed Fiasco Bros. Studio in New Westminster, BC with the lineup of Ray Prizmic (vocals), Marco Banco (guitars), John Prizmic (drums), and Steve Withrow (bass). Although Fiasco Bros. is more widely known as the site of Blasphemy’s most legendary recordings, Witches Hammer was the first extreme metal band to utilize the studio. This trailblazing demo opened with what is perhaps the band’s most recognizable track, “Thulsa Doom,” which was inspired by Robert E. Howard’s “Conan” saga of books and movies. This song became a live staple and was later re-recorded on two separate occasions. Also included was the only studio recording of the song “Witches Hammer,” which was given the title before the band itself had even assumed it. The following year, the band returned to the very same studio to record a second demo simply titled “Demo 87” in reference to the year of its release. “Demo 87” included five new tracks in addition to a re-recording of “Gorgon,” which also originally appeared on the first demo. This second recording also featured more complex songwriting, clearer production, and improved instrumentation in comparison to the first.
As it first did in 2003, Nuclear War Now! is proud to present both of these demos in a single LP compilation entitled “Canadian Speed Metal.” The timing of this repress is appropriate given the fact that Witches Hammer is set to play its first live show outside of Canada in November at the Never Surrender Fest in Berlin, Germany. This release and Witches Hammer’s impending debut performance on foreign soil are certain to recall overdue attention to the band that set the course for a scene that is now immortalized in extreme metal history. 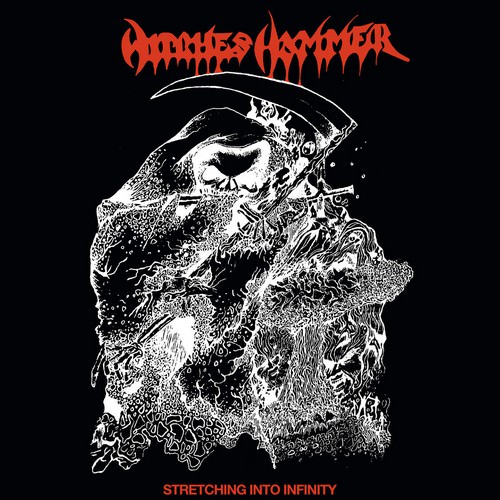 (Description by C. Conrad)
While toiling in the relative obscurity of an underground scene in British Colombia as its first extreme metal band, Witches Hammer self-produced two demos of evil speed metal in the mid-1980s. Following the second demo, a local label by the name of Subversive Productions offered to release a Witches Hammer 7” EP. The band suggested that a 12” EP would be a better format for both improved audio and visual impact, and the label agreed to the request. In 1987 (that same year), Subversive released the record, packaged in a plain white jacket with the photocopied layout glued to front and back, featuring the artwork of Dax Howell. Unlike the previous demos, which had been recorded with sole guitarist Marco Banco, the band had recruited a second guitarist in Mike E. Death for the 12” EP. This addition allowed for a more complete sound since it more readily facilitated both rhythm and lead guitar tracks, the combination of which was not present on the demos. Estimates of the number of copies pressed range from 1500 to 5000, but a house fire in the 1990s destroyed the remaining 500 unsold copies. Following this record’s release, the band continued to play local live shows mostly in support of touring acts, in addition to a brief tour across western Canada. During this time, Witches Hammer gained some exposure and was noticed by, among others, Black Winds from the notorious Blasphemy cult, who later cited the band as a primary inspiration. In 1988, Witches Hammer returned to the studio to record what it had planned to be its debut full-length album. A total of twelve tracks were recorded, including nine tracks that had been previously recorded for prior releases and three brand-new songs – “Inner Sanctum,” Stretching into Infinity,” and “Captain Breakdown” – which collectively were indicative of the band’s continued progression. As with the preceding 12” EP, the band once again summoned Dax Howell to provide the cover art, which was also used for a t-shirt design. As fate would have it, however, the album was never released as originally intended, and these would prove to be the last songs recorded before the band members went their separate ways over the next couple of years. Fortunately, Nuclear War Now! unearthed the tracks from the unreleased album and released them along with those from the 12” EP in a collection entitled “Stretching into Infinity” in 2005. Thirteen years later, NWN! is proud to offer a repress of this compilation, once again on 12” vinyl format. Whereas the earlier demos collected on “Canadian Speed Metal” offer a glimpse into the early days of a band once described by Pushead as a “speeded-up Venom,” these subsequent recordings showcase a fully-matured Witches Hammer that harnessed the evil of proto-black metal bands like Sodom and infused it with a heavy dose of unhinged aggression, similar to that of the local hardcore bands it regularly gigged with in the area. In 2018, this sound is as potent as ever and quite worthy of the recognition it never fully received outside of the Vancouver area in the band’s heyday.

Posted on December 13th, 2018
Written by Insulter
Filed under Uncategorized