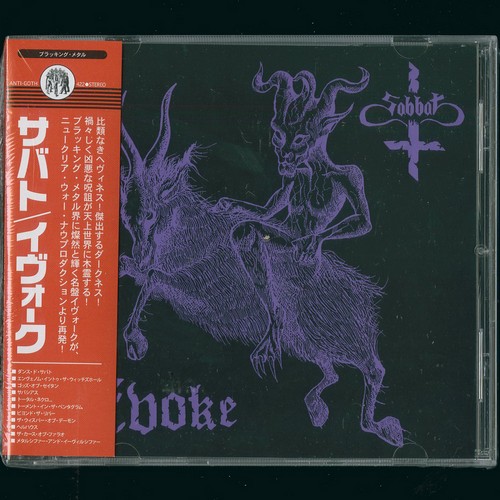 (Description by C. Conrad)
Over the course of the label’s history, few bands have earned and received a level of support from Nuclear War Now! comparable to that of the legendary Sabbat. The long-term mutual respect between label and band culminated in the 2014 box set, “Sabbatical Earlyearslaught,” which compiled both the seminal and previously-unreleased recordings of the band and its previous incarnations from its inception up to the release of its first album, “Envenom,” from 1991. Since then, NWN! has begun the endeavor or releasing Sabbat’s subsequent early albums on LP format for the American market with particular attention paid to maintaining the authentic spirit of the original CD releases from Gezol’s own label, Evil Records, beginning with the January 2018 reissue of “Envenom.” Now, approximately one year later, NWN! proudly presents the vinyl reissue of the band’s second album, “Evoke,” originally released in 1992. As was done with “Envenom,” no consideration has been overlooked in representing the recording as faithfully as possible to the band’s original vision, both musically and aesthetically. Once again, Gezol has arranged the track order in a way that optimizes the album’s release on three sides of a double LP, leaving the fourth side adorned with a silkscreened image of Sabbat’s inimitable artwork from the era.
Although the similarities to its predecessor and earlier recordings are unmistakable, “Evoke” also distinguished itself as a clearly new step in the band’s evolution. Most notably, founding member and original guitarist, Elizaveat, had decided to leave Sabbat permanently during the band’s recording hiatus of the late-1980s, though he returned for his swan song on “Envenom.” During this transitional period prior to the first album, Sabbat found its replacement for Elizaveat in Temis Osmond, who was invited to contribute a keyboard intro and outro for “Envenom,” as well as the guitar solo in one song, at the invitation of Elizaveat himself. On “Evoke,” Temis Osmond officially assumed the full-time guitar duties vacated by Elizaveat, which is evident not only in his style of playing, but also in a shift in songwriting tendencies that is demonstrated on this second album. With Elizaveat on guitar, Sabbat’s music had been more heavily influenced by the NWOBHM movement and Venom in particular. Beginning with Temis Osmond’s influence on “Evoke,” song compositions became somewhat more varied and less reliant on the formulas established by traditional heavy metal and perpetuated by the NWOBHM. Elements of the style adopted by Elizaveat are still present on many of the individual riffs, but multiple progressions within a song are somewhat less predictable and more complex, involving scales upon which more exotic riffs and solos are constructed.
In addition to this shift in songwriting, “Evoke” is also characterized by greater variation in Gezol’s vocal styles. Although the band’s mastermind had been known previously to alternate between lower, growled vocals and high-pitched falsettos, he predominately employed the former on “Envenom,” with the notable exception of the song “Carcassvoice,” where he utilized both in unison. On the other hand, on “Evoke” he moves more liberally between the different registers and includes whispered vocals (see “Hellhouse”) and even somewhat cleaner and more melodic vocals on “Beyond the River.”
These differences with the previous album aside, “Evoke” is anything but an aberration in Sabbat’s development. Instead, it would be more accurately interpreted as a transitional work that began cementing the dynamic among these three members that would endure for almost two decades. As such, it is appropriate that it once again be made available as both an essential archive in Sabbat’s history and also as a monument that reflects the admiration that the band continues to demand worldwide. 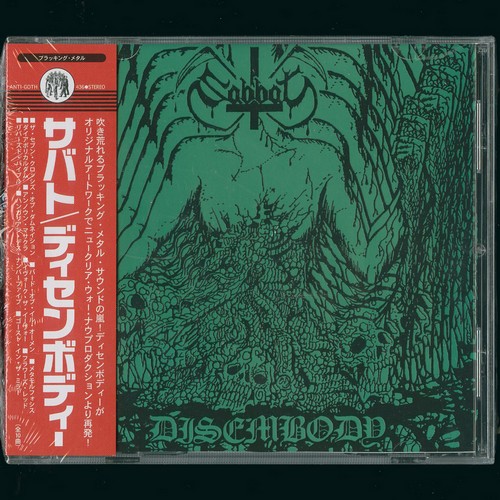 (Description by C. Conrad)
By 1993, Sabbat had already been active under that name for eight years and previously for four more under other aliases. That year marked the release of the Japanese “Blacking Metal” cult’s third album, “Disembody,” which followed “Envenom” and “Evoke” from 1991 and 1992, respectively. This third full-length further solidified the status and chemistry of the three members first fully united on the preceding album, who would remain together for twelve more years, a span during which they would release five more full-lengths and countless other live, split and EP releases. Unlike much of the black metal world, which by 1993 had shifted its attention and tendencies to the sound that was emanating from the Norwegian scene, Sabbat remained true to the essence of first-wave black metal as established by its originators in Venom and others like Sodom. However, the trio of Gezol (bass/lead vocals), Temis Osmond (guitars/vocals), and Zorugelion (drums/vocals) continued to develop their own signature sound on “Disembody,” expanding on and enhancing the more unique approach they had started when Temis Osmond joined full-time, prior to recording “Evoke.” Thus “Disembody” sounds more developed and further refined than its predecessor, but still maintains some of the rawness in spirit that was more readily apparent on earlier recordings.
Originally released on CD format on Gezol’s label, Evil Records, “Disembody” consisted of nine fully original tracks in addition to “Hungarian Death No. 5,” an instrumental adaptation of Johannes Brahms’ “Hungarian Dance No. 5,” arranged and performed in authentic Sabbatical style. As the latest release in its ongoing campaign to reissue Sabbat’s back catalog of albums on vinyl for the North American market, Nuclear War Now! hereby presents “Disembody” on DLP format with two bonus tracks – “Satanas” and a cover rendition of Quartz’s NWOBHM anthem, “Satan’s Serenade.” Once again, the track list has been rearranged by Gezol for ideal presentation on three sides of a double-LP, and the fourth side is adorned with a screen printing of artwork from the band’s archive. Additionally, the utmost attention has been paid to ensure that the layout remains faithful to that of the original Evil Records CD by, among other considerations, replicating the cut-and-paste style employed by Gezol on that version. This adherence to representing “Disembody” as closely as possible to its original form reflects an appropriate level of respect for a band that remains equally true to its own original artistic vision today as it did in 1993.

Posted on June 28th, 2019
Written by Insulter
Filed under Uncategorized