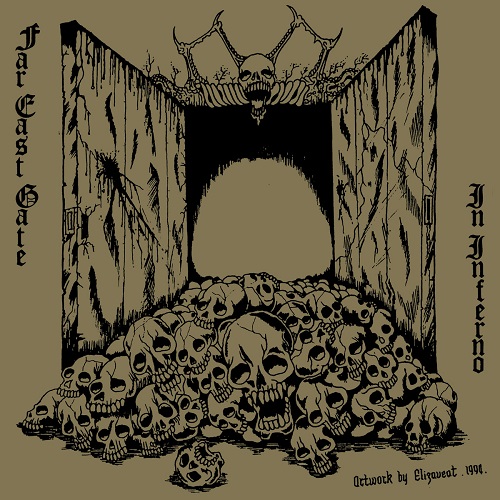 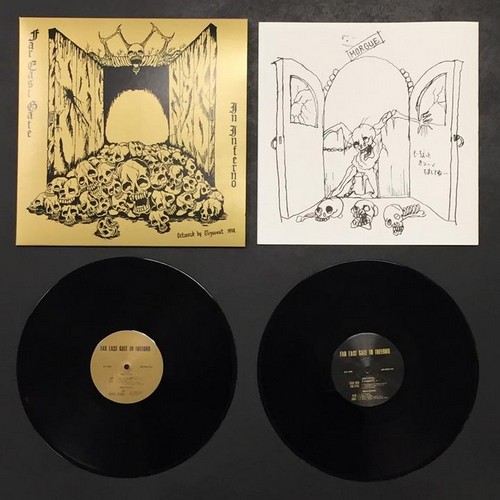 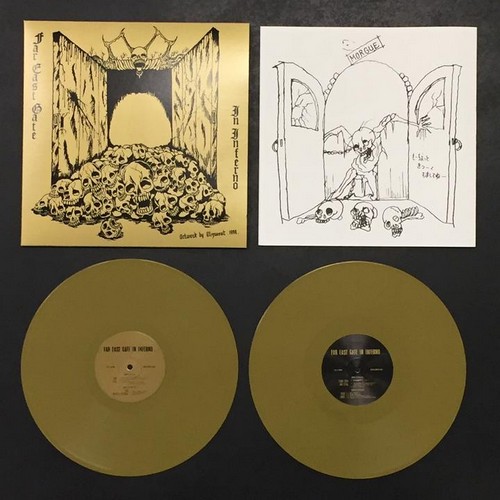 (Description by J. Campbell)
Founded by Gezol, in 1984, as a conduit for releasing Sabbat, Evil Records stood nearly alone as one of the only Japanese labels dedicated to releasing extreme metal. In the first decade of the label’s existence, there were few bands other than Sabbat with releases on Evil Records. In 1994, just as the label was hitting its stride, Gezol organized a compilation to showcase some of the prominent underground bands in Japan and project them to a larger audience. Featuring eight bands that were active at the time, including Sabbat, the “Far East Gate In inferno” compilation provides a snapshot of the mid-90s Japanese extreme metal underground. Initially, Gezol contacted some of the bands directly, but still needed more submissions to fill out the roster. He sent out a flyer requesting demo submissions and circulated it to zines, eventually selecting a few bands based solely on the quality of their demo recordings. The majority of the bands featured had short-lived careers, and the material presented here is among the only documentation of those bands’ existence. Musically, the selection runs the gamut of extreme metal, covering thrash, death, grind, and black metal. At the time, Gezol noted, there was virtually no traditional heavy metal activity in Japan, and, therefore, no heavy metal bands appear on the compilation. (Due to the dearth of Japanese traditional heavy metal acts, Gezol started Metalucifer a couple years after the release of “Far East Gate In Inferno.”) Names like Sigh and, of course, Sabbat are familiar to all at this point, but many of the other bands on this compilation scarcely recorded anything and, if not for this compilation, might have been forgotten altogether. The first side collects tracks from two death metal bands, Worm and Abyss, neither of which released anything of note beyond their contributions to this compilation. Yet both bands demonstrate unique approaches to the death metal genre, spanning from brutal to melodic to hyper-technical. At nearly ten minutes in length, the Sigh track featured on the compilation, which opens side B, is an epic sprawl of furious black metal punctuated with intermittent atmospheric passages. Monarchie Infernale pushes beyond conventional death metal, with a sloppy and frenetic sound that veers closer to grindcore. Like Sigh and Sabbat, Terror Squad has remained active through the years and produced a deep catalog. The band’s contribution to this compilation, a six-minute blitz of relentless thrash, captures Terror Squad in its primitive stage, when they only had a couple demo recordings to their name. Dark Ritual, a band that only released a few demos in the early 1990s, provides a heavier, darker death metal sound than any of the other bands on the compilation. The penultimate band featured here, Voidd, which released its debut album on Evil Records in 1993, delivers two tracks of pummeling deathrash. Finally, closing out the compilation is Sabbat, with three alternate versions of classic songs—“Black Fire,” “Satanic Rites,” and “In Satan We Trust”—that appeared on early releases. Consistent with the time period in which it came out, this compilation was originally released only on CD, and this reissue marks the first ever vinyl edition. Visually, the CD was striking, with cover art, both on the original CD version and this current DLP edition, featuring artwork by then-Sabbat guitarist Elizaveat. Like many of the most memorable compilations of that era, the bands here were striving to present their best material in the hopes of garnering more interest, as opposed to the current era where compilations tend to be repositories for bands’ least listenable output. According to Gezol, “Far East Gate In Inferno” was largely well-received and drew attention to the abundance of extreme metal activity in Japan. He originally intended to follow up with a second volume, but his dedication to Sabbat and Metalucifer left him stretched too thin to dedicate the time and resources needed to curate and release another compilation at the time. NWN! will be working with Gezol to produce a follow up compilation in the near future featuring new tracks from the current crop of Japanese extreme metal bands.

Posted on October 26th, 2019
Written by Insulter
Filed under Uncategorized