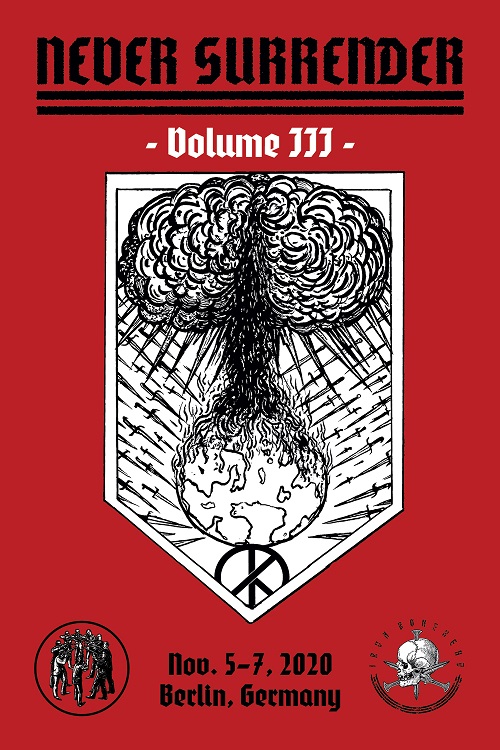 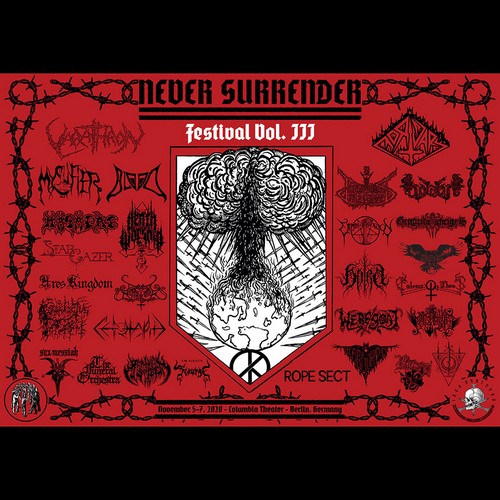 With a final lineup of 28 bands now solidified, the Never Surrender Festival III promises to be the most devastating yet. As with past installments, Nuclear War Now! and Iron Bonehead have again partnered to assemble a cadre of bands that will showcase both labels’ individual and combined visions and to further their support of the very best in the metal underground. The lineup in its entirety includes a number of venerable acts who have stood the test of time, as well as those who have just begun to establish themselves as worthy successors. Some will appear on the international stage for the first time, whereas others will return to undoubtedly recapture and even surpass the glory of past performances. Following its predecessor’s destruction of the San Francisco Bay area in October 2019, Never Surrender III ventures back to Berlin, Germany for three days of fire and fury on November 5th, 6th, and 7th, 2020. Tickets are currently available, so commit now to witnessing the metal event of the year.

The following bands are now confirmed for NSF III: 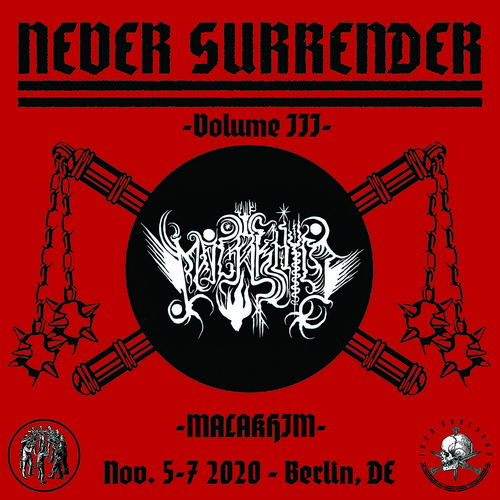 Swedish black metal stalwarts stepping foot in Berlin for the first time! Orthodox but muscled in the Metal of Death, MALAKHIM will be presenting their long-awaited debut album for IRON BONEHEAD at NSF III. Prepare to worship! 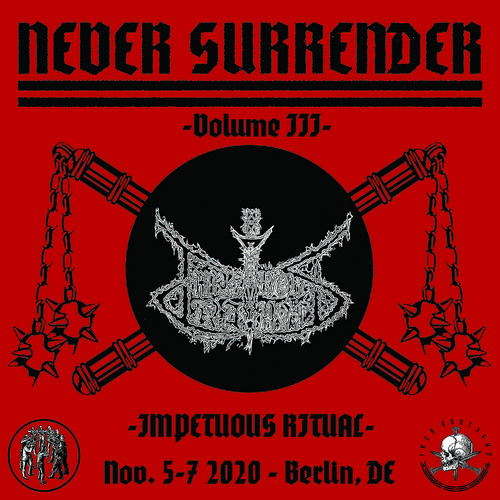 No strangers to the stage, Australia’s long-running and well-regarded IMPETUOUS RITUAL will bring their barbaric black/death to the NSF stage once again. IRON BONEHEAD will be releasing the band’s 2019 tour recordings this year, but this is one cult to witness in the flesh.

EMPIRE OF THE MOON (Greece) 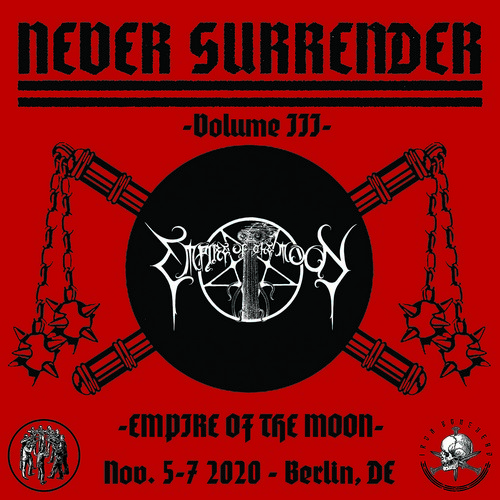 Enigmatic and very long-running pillars of Greek black metal, EMPIRE OF THE MOON will be making their first live appearance outside their homeland at NSF III. Mesmerizing and mystical, their latest album for IRON BONEHEAD, Eclipse, will be presented – NOT to miss!

BLUE HUMMINGBIRD ON THE LEFT (USA) 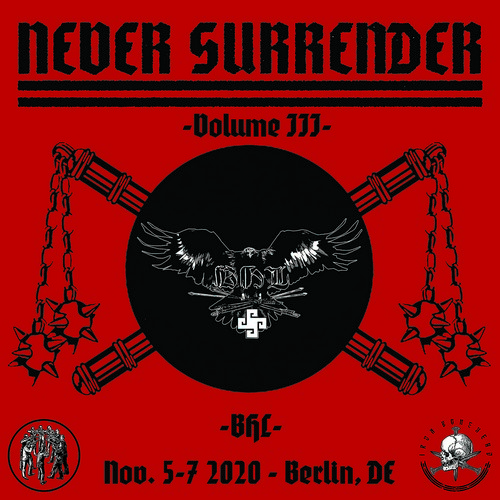 As the War Tribe, BLUE HUMMINGBIRD ON THE LEFT continue to march under the banner of the Sun. The Cult of Huitzilopochtli continues to grow through conquered people.
Commanded by the solar war eagle, the tribe returns to Europe to wage war at NEVER SURRENDER VOL III. Deutschland shall feel the Sun’s warmth then obliterate in it’s fury. 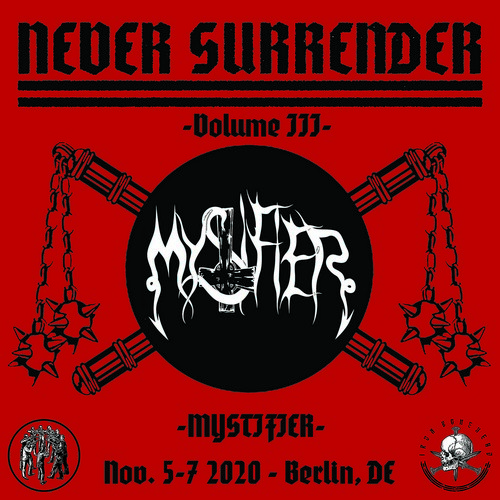 It was 10 years ago that Mystifier played the NWN Fest for the first time. With renewed alliance with NWN, the Baphometic black metal horde will desecrate Berlin once again. Expect some big announcements regarding our alliance very soon. 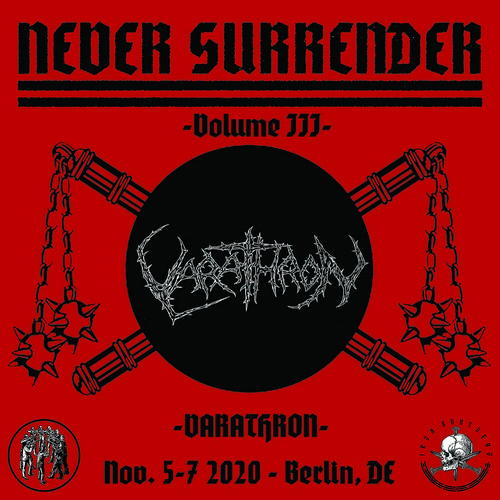 The majesty rises again from the Hellenic swamp to mesmerize the mortals with its aural occult magick. Get ready to be transfixed by Varathron’s necromantic riffs! 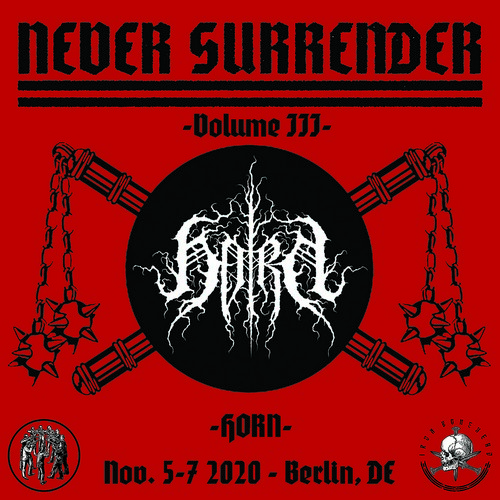 Teutonic black metal masters bring their pagan fury to native soil. A prolific force for nearly 20 years now, HORN will be releasing a new IRON BONEHEAD album in May. Taste their German steel! 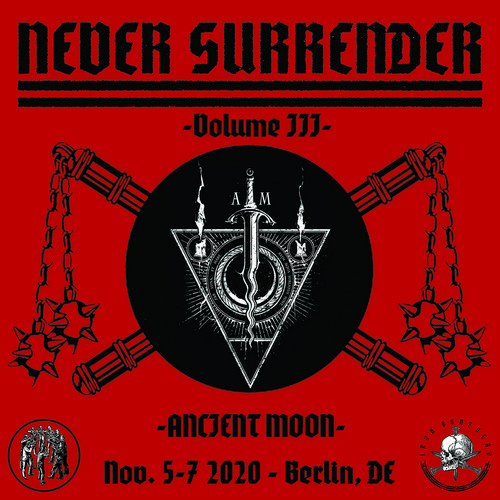 A rare live appearance from these black metal enigmas: shrouded in mystery, ANCIENT MOON have just started playing live at the beginning of 2020. Following last year’s massive Benedictus diabolica, Gloria Patri for IRON BONEHEAD, this will be a performance NOT to miss! 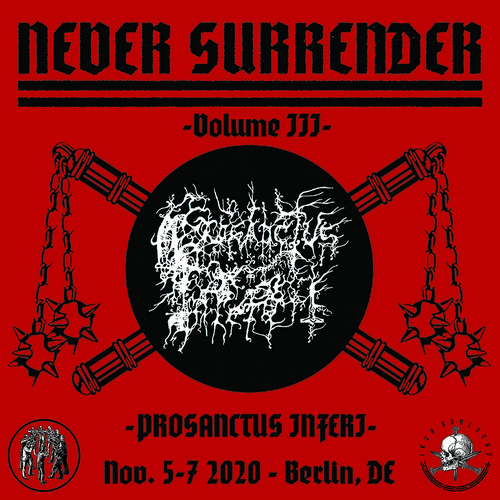 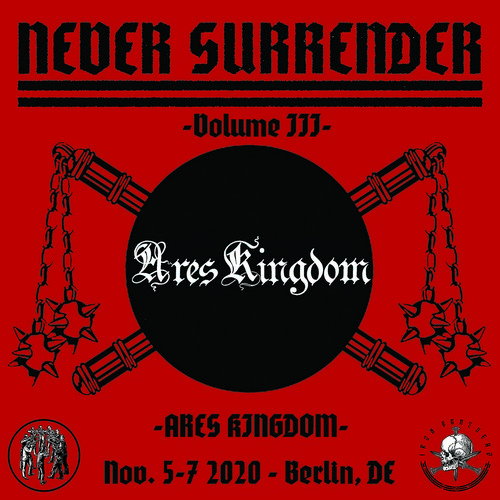 2020 marks 15 years of conspiracy between death metal veterans Ares Kingdom and NWN. To commemorate this steadfast partnership, Ares Kingdom has been summoned to Berlin to bring their light of destruction to Never Surrender Fest III. Indeed, it is time to burn again… 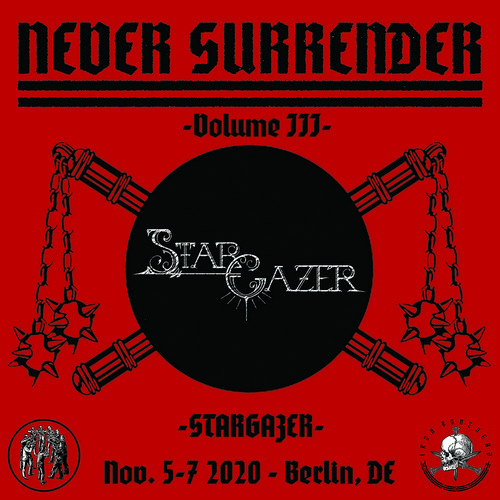 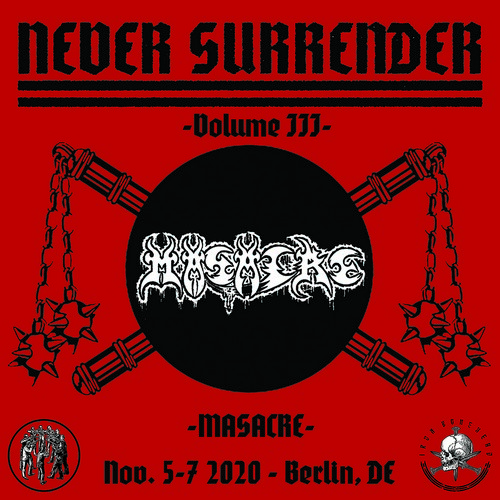 The Medellin death metal legends will finally play in Berlin for the first time since their formation in 1989. They will perform an old school set of material from the two MLPs and first album. 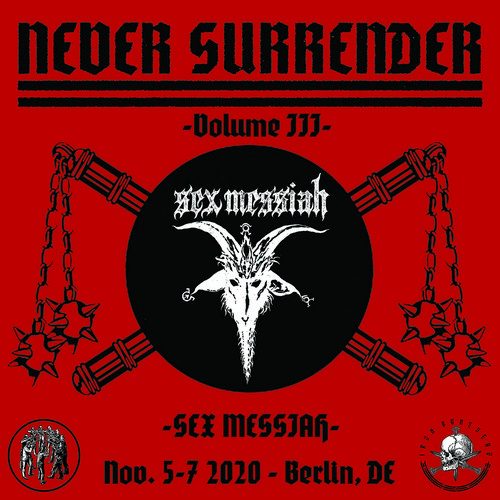 After many live rituals across Asia and Brazil, Sex Messiah is now ready to desecrate Berlin for the first time. Expect only uncompromising harsh black metal! 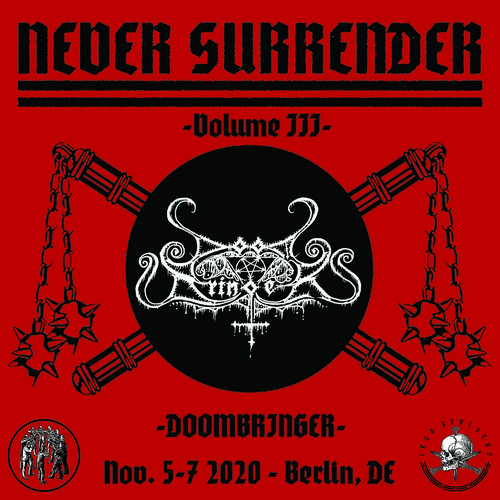 Necromancers hit the Berlin again, with full force! Expect nothing more than relentless offering to Evil Spirits! This will be one of the few ocasions to witness Doombringer live in 2020! 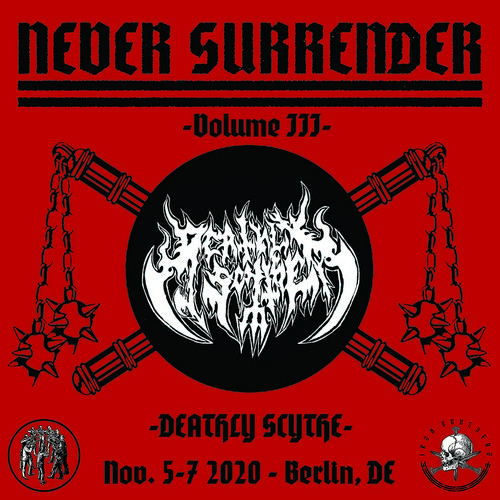 One of the darkest hidden gems of Chilean/German Evil deathrash! Attacks Berlin under the banner of NWN. Prods & Life Eternal Prods” Expect their long awaited debut album, “Deathlike Essence of Time,” to be released in summer of 2020. 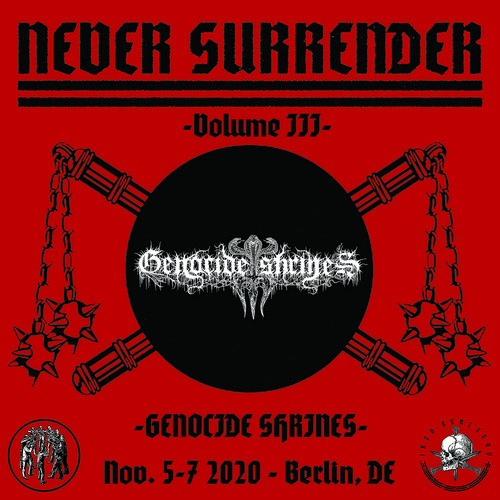 Sri Lanka’s singular black/death desecrators step foot upon European soil for mass destruction! Few command such awed respect as GENOCIDE SHRINES: utterly devastating in the flesh, this special performance is NOT one to miss. 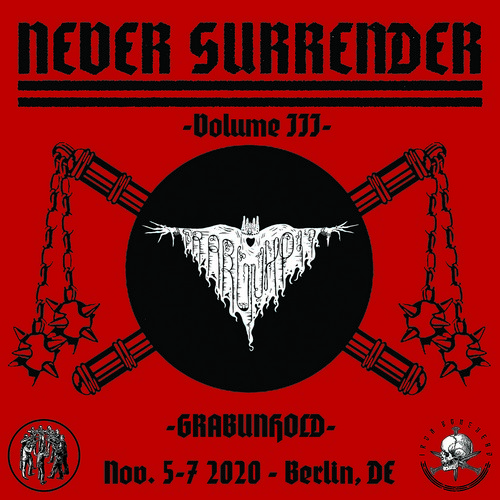 Fresh from their debut mini-album for IRON BONEHEAD, these German black metal medievalists shall honor their homeland by bringing their ancient sound to the stage, swords aloft. Debut album for IBP due this year! 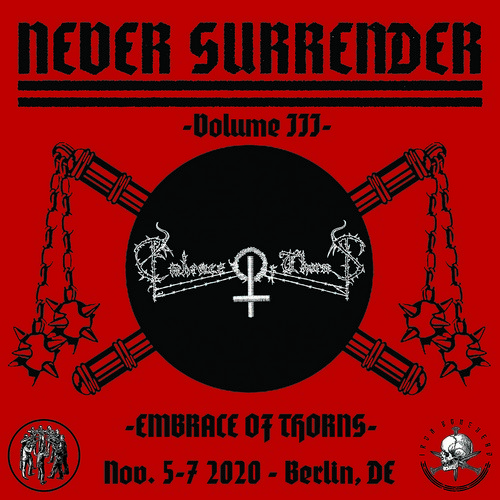 Greek black/death institution brings its militant, finessed bestiality to Deutschland. No strangers to the stage, with a new 7” for IRON BONEHEAD due this year, expect a strident possession like no other! 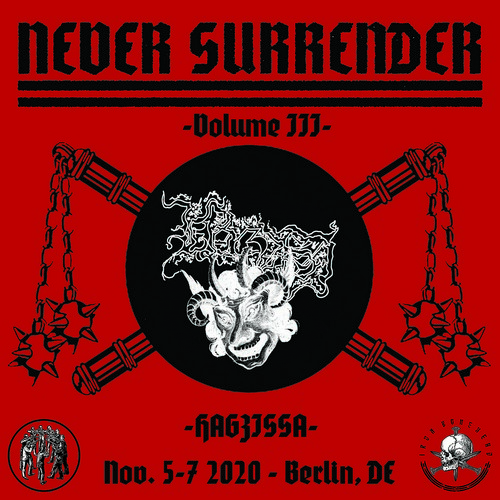 Bewitching Austrian upstarts step across the border and bring their wild ‘n’ wanderlusting black metal to the NSF stage for the first time. Although a formidable live entity elsewhere, IRON BONEHEAD is proud to bring HAGZISSA’s iconoclastic obscurity to new audiences. 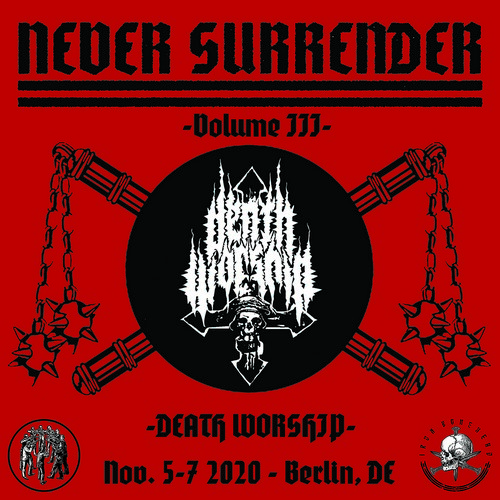 Ross Bay bestial black metal veterans finally sets foot in Germany to perform their first live ritual ever! This will be a historic event just as the Conqueror performance was in 2016. DO NOT MISS! 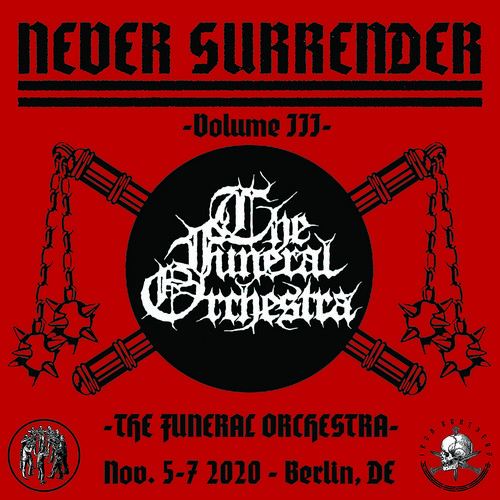 Swedish Apocalyptic Doom masters showcase how dismal music should be done. Expect a new album out in 2020 via NWN. 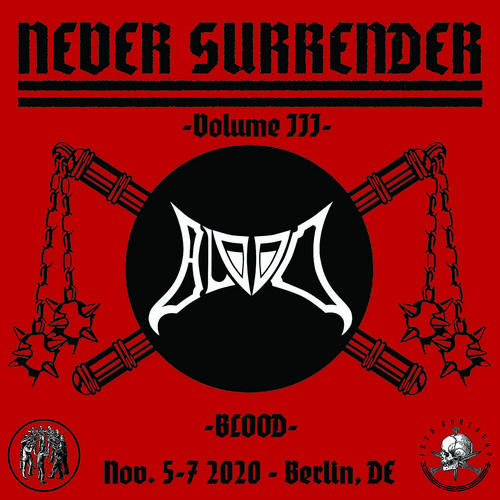 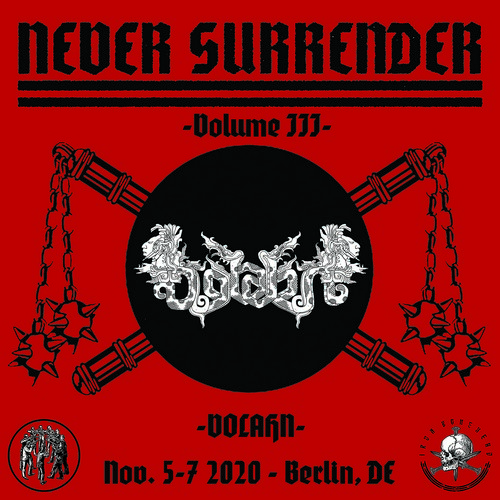 Just as ceremonial scripture burns upon the altar. Smoke ascends towards Berlin as the vision serpent takes form. NEVER SURRENDER Vol. lll will fall to absolute Maya rule!
Black Twilight Circle shamans VOLAHN return to Deutschland with rabid dominance! Performing their upcoming new full-length album in its entirety, VOLAHN demonstrate their position as one of the most revered live black metal bands of today.
New album to be released by Crepúsculo Negro, IBP, NWN. 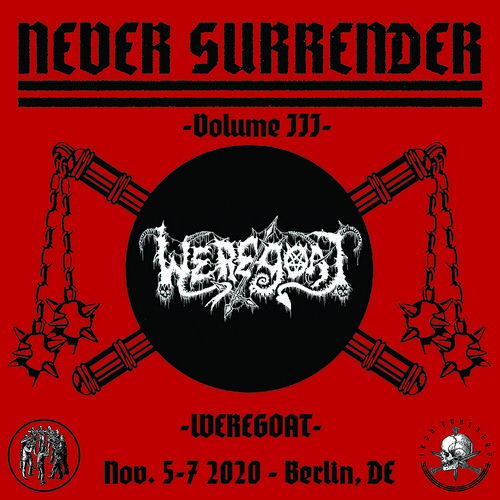 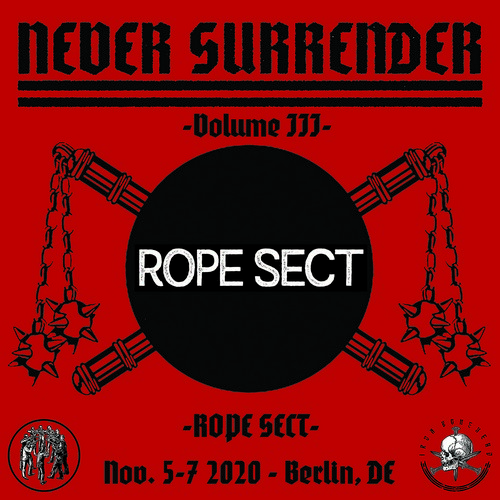 As a symbol of NSF shattering boundaries much as both IBP and NWN! do but often don’t get credit for, these German deathrock isolationists take the stage amidst unrelenting violence all around them. Debut album for IRON BONEHEAD expected in 2020. 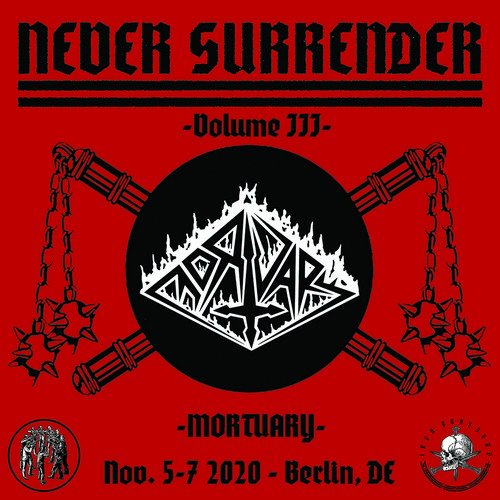 Reanimated Mexican death metal legends set to arrive in Europe for the first time ever! This performance will be an exclusive old-school set comprised of 1990’s classic Blackened Images. Mandatory madness! 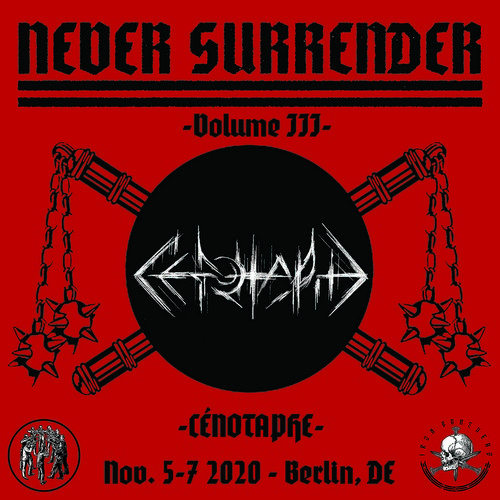 Following the forthcoming release of their first album “Monte Verità” on NWN, CÉNOTAPHE will deliver their first live display of French black metal excellence, in all its glorious violence, on the exclusive occasion of the Never Surrender Festival. 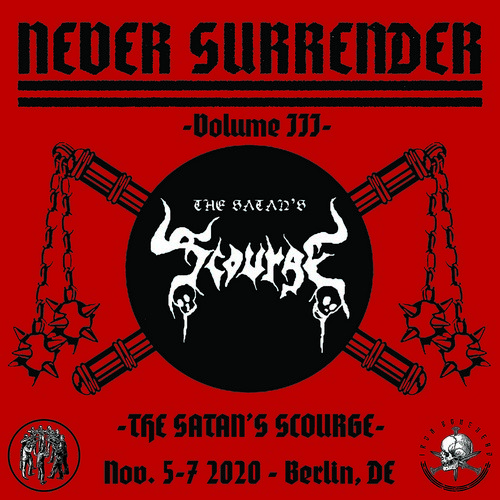 As a final and unexpectedly welcome bonus addition to Never Surrender III, The Satan’s Scourge (Columbia/Argentina) will bring its decidedly South American concoction of black death to Berlin to open the fest. Nuclear War Now! will release the vinyl MLP version of “Threads of Subconscious Torment” prior to the festival.

Posted on April 9th, 2020
Written by Insulter
Filed under Uncategorized