Coming soon on Nordvis and distributed in the USA by NWN! 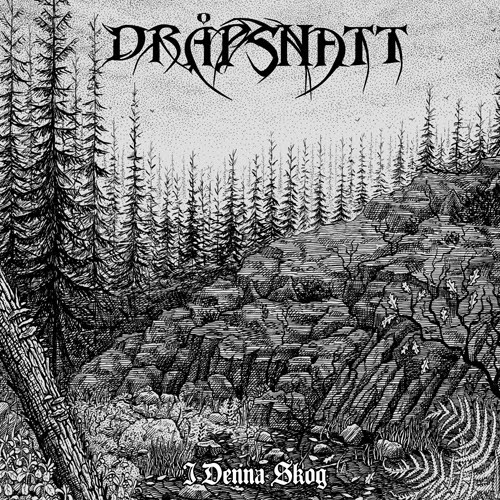 On February 7th, 2020, Nordvis Produktion will release the first in a series of Dråpsnatt’s out-of-print back catalog: the band’s debut album, I denna skog, from 2009. Each reissue will feature new cover art.

Cold voids and desolate plains. Snow-capped mountains and dense forests. Northern lights and cosmic vibrations. The images Dråpsnatt paint in your mind are vivid and stark, to which their now-finally-reissued 2009 debut I denna skog stands testimony. Nine tracks of melodic blackened metal tell bleak-yet-grand tales of winter, death, and nature in a most Scandinavian manner.

Expertly arranged keyboards enhance the atmosphere with both textural ambience as well as majestic melodies and riffs, and clean guitars and vocals bring a harmonic-yet-melancholic counterpart to the abrasive blasts and screams. Rocking riffs harken back to the primitive sounds of the ’80s, while the more symphonic and melodious parts rival the work the likes of Borknagar, Arcturus, and Tartaros made in the ’90s.

This is music that will instantly transport you into the somber silence of a freezing midwinter night, breath steaming as you gaze between snowy treetops at the distant stars, and ponder about the cosmic secrets only death can reveal. I denna skog is a mystical and rare beast: give it a finger and it’ll devour your soul – and you’ll be grateful it did!

Release dates for the reissues of Dråpsnatt’s Hymner till undergången (2010) and Skelepht (2012) to be announced shortly. Preorder info for I denna skog can be found HERE. Cover and tracklisting, as well as band bio, are as follows:

Dråpsnatt are a Swedish band devoted to the majestic northern nature. Their sound is one of dark, sorrowful, and frostbitten black metal with acoustic passages supported by clean vocals and piano.

Dråpsnatt was started in 2005 by Vinterfader and Narstrand. The two had been working together in other various small projects, with creative freedom as the main guideline, and Dråpsnatt was not supposed to differ in that aspect. The band was formed with the idea to keep it simple, atmospheric, and brutal, taking inspiration from old pagan tales, northern nature, mythologies, and so on. No rehearsals, no planning ahead: what you hear is spontaneous and honest music that comes from the depths of these beings. The music is written, recorded, and mixed by Vinterfader and Narstrand themselves, all to get the sound and atmosphere that will hopefully speak to you in a very special way.

The literal translation of the word “Dråpsnatt” would be “manslaughter night,” but there is no end to how bad that sounds; it just doesn’t translate very well. As a short mood-setter to understand the name better… Imagine a lonesome traveler at night, following a dark path through the forests of Sweden in the year 1800. He gets overthrown by someone – or something – which costs him his life. The village starts to gossip and starts rumors about those responsible for the death: ghosts, goblins, and whatnot. That was pretty much the scenario that they had in mind when choosing the name.

Nordvis Produktion is proud to align with Dråpsnatt and properly reissue the band’s three central albums: 2009’s I denna skog, 2010’s Hymner till undergången, and 2012’s Skelepht. Whether this is portent of Dråpsnatt rising from the grave and releasing more material, only time shall tell…

Posted on November 23rd, 2019
Written by Insulter
Filed under Uncategorized