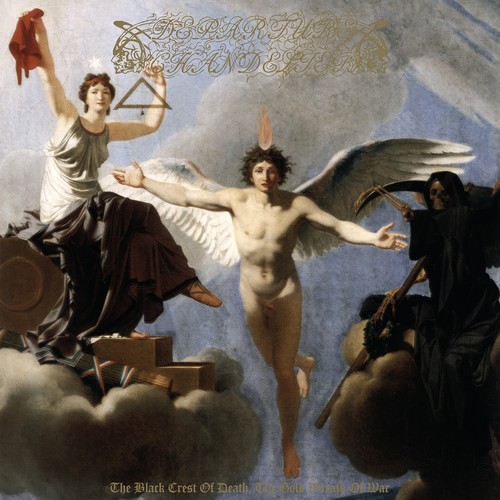 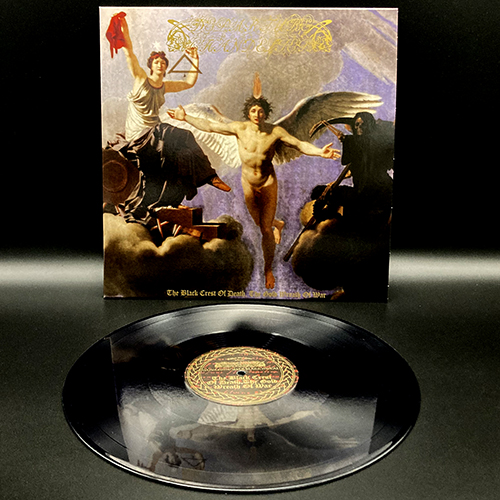 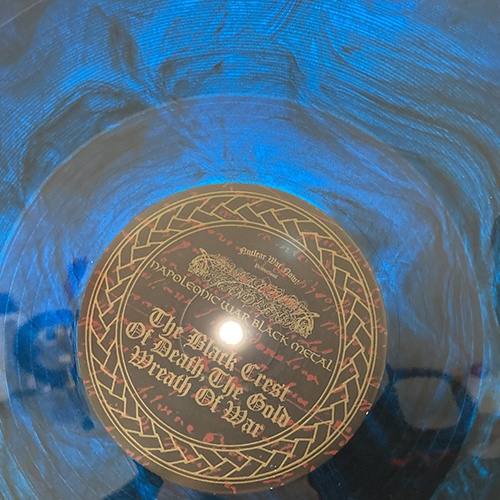 Originally released in 2011 on the Tour de Garde label, Departure Chandelier’s demo recording, “The Black Crest of Death, the Gold Wreath of War,” was recorded in 2010, a year after “Antichirst Rise To Power,” the band’s recently released debut full-length completed in 2009. With slightly heavier production than the album—an intentional act by the band—this demo nevertheless achieves the same atmosphere, one defined by the inherent discord between the visceral body of the songs and the ornate melodies reflected in the poignant interplay of guitars and keyboards, in which one hears the influence of O.T.A.L. and Strid. Musically and conceptually, Departure Chandelier explore the dichotomous relationship connecting unbridled freedom and the concomitant lust for power with tyranny and despotism. “The Genius of France between Liberty and Death,” the late-18th century painting by Regnault, serves as the cover art and the entry point into the release. France appears depicted as an angel, poised, with arms outstretched between the enlightened figure of Liberty and the shrouded voyeur of Death – all three looming along the bloody path to the guillotine of the French Revolution. Internalized in Departure Chandelier’s music is the tension between these contradictory states, and the recognition of the sinister need for opposing forces, held in precarious equipoise, but always pulled to the dark and imbalanced side of the scales. The shadow of the Marquis de Sade—a counterpoint to the Emperor Napoleon—looms over Departure Chandelier’s demo. The superimposition of Sade and Napoleon—both from noble families, both participated in the revolution, and both perished in state ordered incarceration—the dialectic exploration of tyranny and freedom, of libertine sadism—is at the heart of Departure Chandelier’s “Napoleonic War Black Metal.” Usurping the waning power of the divine, clutched in the hands of man, Sade, untethered by moral dogma, indulged his boundless destruction of morality. As his writings turned criminal, Sade drew the ire of Napoleon, who ordered his arrest. The aristocrat-philosopher as prisoner resisted justice until his demise. And yet, whether sequestered behind the stone walls of the Bastille or condemned to Charenton Asylum, de Sade’s corruption still bloomed; loyal to his philosophy, his beliefs remained unaltered. “The Black Crest of Death, the Gold Wreath of War” forms an essential piece of the Departure Chandelier discography, and, as such, is made widely available again with this reissue.