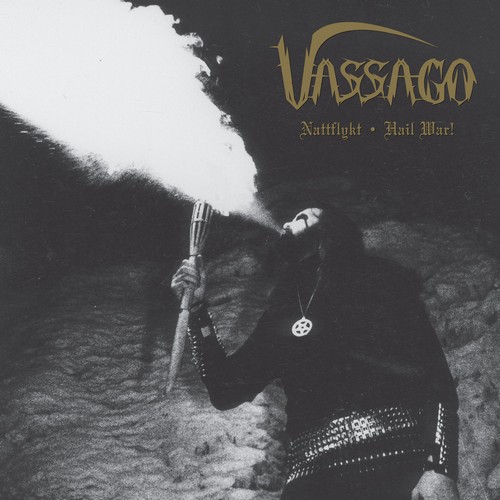 (Description by J. Campbell)
Last year, NWN! reissued “Knights From Hell,” the obscure, underappreciated classic debut album released in 1999 by Sweden’s Vassago. The reissue rekindled interest in the band and now NWN! is joining forces with Vassago once more, this time for the release of the band’s earlier material. Vassago was a project formed by Niclas “Pepa” Andersson and Micke “Sin” Backelin, both of whom were better known at the time for their involvement with Lord Belial. With Vassago, however, the two delivered a bestial, yet intricate onslaught of black death. Self-released on the band’s Total War label in 1994, the “Nattflykt” demo is a severe statement of intent, which the band perpetuated with the 1996 self-released “Hail War!” split LP featuring Antichrist (Ger). This new LP collects all the tracks from both the demo and the split LP. (Two songs, identical versions of which appeared on both recordings, have been omitted from the “Hail War” side.) These recordings are a stepping stone to the brilliance of “Knights From Hell,” but they are also outstanding in their own right, presenting a unique sound that is generally not associated with the mid-90s Swedish black metal movement. Though more primitive and less frenetic in its execution compared with the album, this material possesses a bludgeoning forcefulness and piercing intensity that characterizes this early incarnation of the band. The tracks are furious, reckless, yet not lacking melody or composition. Sin’s raptor-like vocals howl and seethe wrathful vengeance, punctuating the spectral fury of the instrumentation. This LP finally restores these early Vassago recordings to the prominence they deserve. Having completed these reissues of the prior Vassago catalog, NWN! will also be working with the band to release new material in the next year.