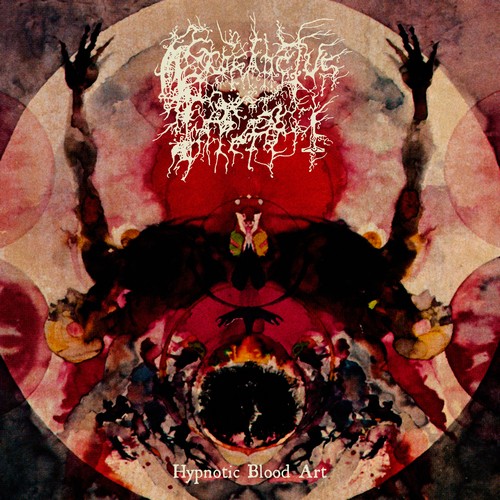 (Description by J. Campbell)
For 15 years, Ohio’s Prosanctus Inferi has unassumingly amassed an impressive catalog of deviant black/death metal. Their sound is distinctive and warped, as are the accompanying conceptual explorations and aesthetic visions. On Prosanctus Inferi’s third full-length, “Hypnotic Blood Art,” the band has further refined its approach, painstakingly sculpting the songs, chiseling details and carving away superfluous material. In the early days, Prosanctus Inferi was a duo consisting of guitarist/vocalist Jake Kohn and drummer Steve Mercer, who was later replaced by Antichristus until his death in 2010. Since then, Kohn has remained the only consistent member. For the last full-length, 2013’s “Noctambulous Jaws Within Sempiternal Night,” Prosanctus Inferi operated as a three-piece, but this new album finds them active once more as a duo, with Kohn accompanied by drummer Jeremy Spears, who has been in the band since 2010. With each release, the Prosanctus Inferi has tightened and focused its sound, perfecting its pummeling power. On “Hypnotic Blood Art,” Kohn sheds some of the technicality and velocity of his prior performances in favor of a heavier sound, reflecting, in many ways, a return to the band’s foundations. The instrumentation on “Hypnotic Blood Art” is tightly coiled, anxious. The riffs are taut and lean, their potential fully realized through the kinetic force of the percussion. As with all of Prosanctus Inferi’s recordings, eccentric flourishes abound throughout “Hypnotic Blood Art,” adding dimension and distinction to the work. Lyrically and conceptually, Kohn also harkens back to the band’s earlier days, with a focus on medieval and renaissance conceptions of Hell and damnation—topics that figured prominently on the demo recordings. This album is, therefore, the culmination of the band’s work thus far, the fulfillment of its potential, and, yet, still offers stylistic innovation and development for one of the most intriguing and dynamic American bands of the last two decades.

Posted on July 4th, 2020
Written by Insulter
Filed under Uncategorized