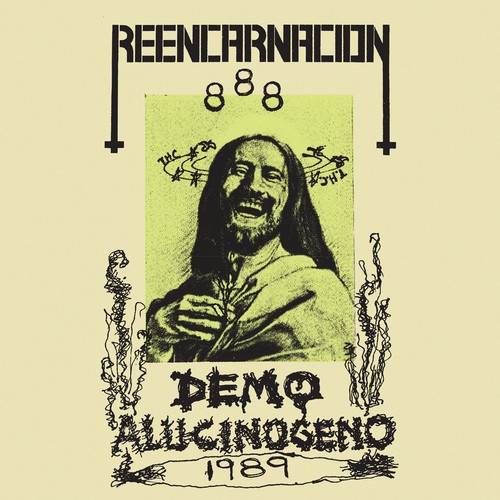 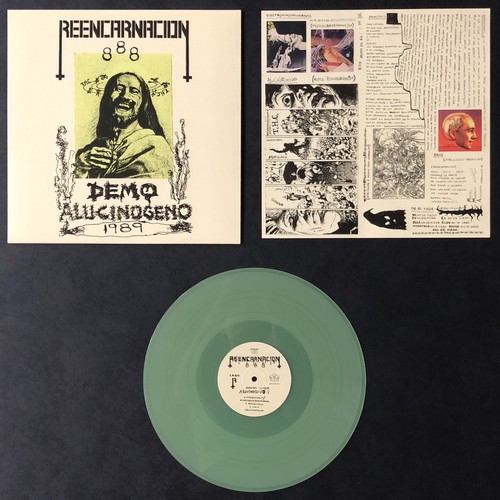 (Description by J. Campbell)
By now, the name Reencarnación is well-known to fans of extreme metal. The band’s “Acompaname A La Tumba” 7” and self-titled debut LP, both released in 1988, are firmly established in the canon of the “Ultra Metal” scene associated with Medellin, Colombia. Lesser known, but no less significant is the band’s 1989 “Alucinogeno” demo. This demo reflects a departure from the sound the band achieved with its previous recordings and provides a bookend to the early phase of the band. After its release, founding member Piolín and drummer El Gato, who played together on all the early material, would part ways, and the band lay dormant for several years before Piolín resurrected the project in the mid-90s for the “Planeta Azul” demo before later guiding it into decidedly different territory. In many ways, however, “Alucinogeno” is the perfect synthesis of the many creative voices in Piolín’s mind. As the name suggests, it is hallucinatory—an amalgamation of primitive deathrash and nightmarish psychedelia. It is among the most extreme and experimental metal recordings made by that time, radically different from anything else their peers were doing. Most of the tracks are short, coming in at about three minutes or less, and have a loose, almost improvised feel. The demo opens with a warped organ intro before descending into disorder with the instrumental track “Electroencefalograma” in which the coarse distortion of the guitars spar with frantic percussion and piercing shrills of feedback. The first appearance of Piolín’s vocals occurs on the third track, “Apocalipsis,” which begins as a hellscape of brooding sludge but ends in a frenzy of violence that continues with the following 25 second track, “Odio.” Ending the first side is the disorienting title track, “Alucinogeno,” featuring an abstract collage of percussion, tape loops, effects, and vocal manipulations. The second side, which opens with “Sábado Negro”—the opening riff of which is borrowed from its namesake—is more consistent with the band’s earlier material: the spasmodic, labyrinthine ultra-metal for which Reencarnación is well known. For decades, this demo remained unjustifiably obscure, having received its first reissue in the mid-2000s before disappearing again for another decade or more. This NWN! edition marks the first time this unique recording has been committed to vinyl and widely disseminated.

Posted on August 10th, 2020
Written by Insulter
Filed under Uncategorized