Varathron “His Majesty at the Swamp” LP 3rd Press Out Now 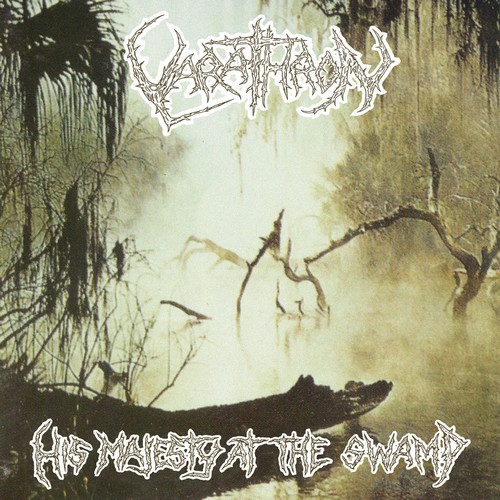 (Description by J. Campbell)
There are few styles in metal so uniquely tethered to a particular place and time as that produced by a handful of Greek Black Metal bands in the early 1990s. Without question, the unholy trinity of this scene was composed of Rotting Christ, Necromantia, and Varathron. These three bands produced the most significant recordings in the canon of Greek Black Metal, and, to many fans and followers of the scene, Varathron’s 1993 debut LP, “His Majesty at the Swamp” represents the apex of the sound and spirit of Hellas’ contribution to the Black Metal genre. All of the representative traits of the style find their expression on this album – sonorous and melancholic guitars, the rich, occult atmosphere, ecstatic vocals, imbued with sinister intent, funereal keyboard flourishes, the bleak dampness of the production, the conjuration of a sense of abject solitude, and the somber pace of the tracks – aligned in perfect resonance with the pulse of Greek Black Metal. Having gone in and out of print several times through the years on various formats and in varying degrees of quality, band leader and original member, Necroabyssious, decided to issue a definitive version of “His Majesty at the Swamp” on his own label, Order of the Blood Dog. This version retains the mix and mastering that appeared on the original pressing of the album, but which was altered on some subsequent pressings, features all of the original artwork, and includes the lyrics as well as the original thanks list and credits.

Posted on September 24th, 2020
Written by Insulter
Filed under Uncategorized