Intellect Devourer “Demons of the Skull” LP Out Now 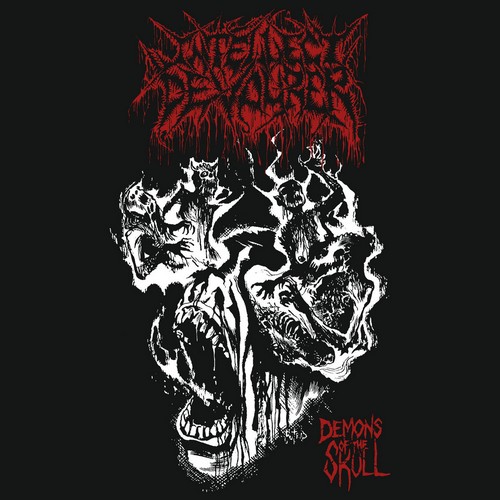 (Description by C. Conrad)
First established in 1992, Intellect Devourer has long been granted cult status in the Australian metal underground. Playing a uniquely extreme style of technical death metal, the band recorded a single, “Prayer to Thessaly,” in 1993, and a three-song demo, “Horselustvulgaris,” in 1994. However, the band dissolved that same year, and drummer Denny Blake went on to form the great StarGazer, whose work would gain much more recognition in the decades that have since passed. Other projects of Blake’s, such as Misery’s Omen, Martire, and Cauldron Black Ram, have also gone on to reach wider international audiences than Intellect Devourer. That fact notwithstanding, Intellect Devourer reformed with most of its original members for a brief stint from 1999-2001, during which time the band produced a second demo, “Mundus Intellectualis,” a six-track affair that was the most significant recording to that point. More than ten years passed before the reformation leading to the band’s current iteration occurred in 2012. Now, nearly thirty years since Intellect Devourer’s inception, Nuclear War Now! is proud to present the vinyl LP version of the band’s first full-length, “Demons of the Skull.” Recently released on cassette by Caligari Records, this debut showcases the band’s precise brand of technical death metal, honed over the course of many decades and seasoned by the combined wealth of experience of its five members. As such, “Demons of the Skull” will rightfully prove Intellect Devourer worthy of its reputation earned in its native land and deserving of greater consideration beyond.

First pressing of 250 copies on black vinyl with 3mm jacket and 12″ insert.

Posted on November 20th, 2020
Written by Insulter
Filed under Uncategorized