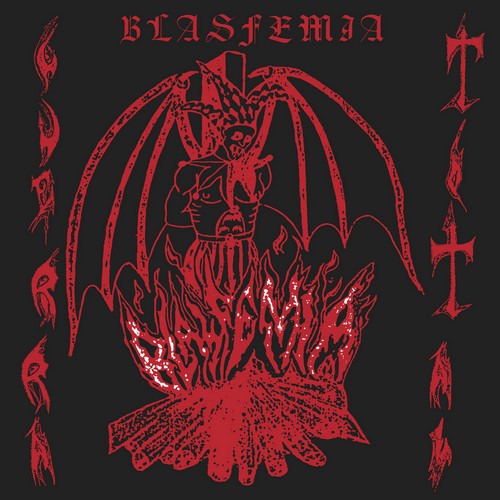 (Description by C. Conrad)
With its previous releases from the likes of Reencarnación and Nemesis, Nuclear War Now! has demonstrated its affinity to the “Ultra Metal” scene that was endemic to the city of Medellín, Colombia in the late 1980s and early 1990s. This strain of unhinged fury was spawned by the great Parabellum, who is recognized as the first extreme metal band to emerge from Colombia and one of the first from the entire continent of South America. Upon Parabellum’s disbandment in 1986, the similarly-styled Blasfemia was born. Founded by two members of Parabellum, Ramón Restrepo (vocals / bass) and Jhon Jairo Martínez (guitars), Blasfemia sought to outdo the rawness and brutality of its predecessor in a sound that reflected the harsh reality of existence in a place ruled unofficially but unequivocally by the sinister hand of a powerful drug cartel. To execute this vision, the two founding members called upon the services of neighborhood friend and percussionist Luis Fernando Cano. Between 1986 and 1988, Blasfemia performed live a handful of times with bands such as Reencarnación, Nemesis, Astaroth, Profanación, Necromantie, Glöster Gladiattor, Necrofilia, and others. It also recorded several demo tracks and, most notably, a four-song EP entitled “Guerra Total.” The EP was released on 12-inch vinyl format in two separate iterations by two different entities in 1988. The more limited version was apparently pressed on only 100 copies and is identified by its gray center labels, but it was not fully endorsed by all members of the band. The other edition, which features red center labels and a secret needle mark, was pressed on 500 copies. Alternate versions of two previously-recorded tracks were also released on two different compilations in 1988 and 1989 before Blasfemia essentially disappeared until its reemergence in 2011. Nuclear War Now! hereby presents a highly-merited reissue of the “Guerra Total” EP, along with all other Blasfemia recordings known to exist from its original era. With this release, the legendary Medellín Ultra Metal scene is deservedly given new life.