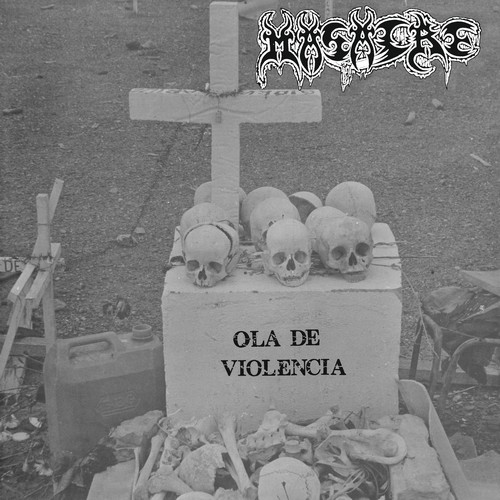 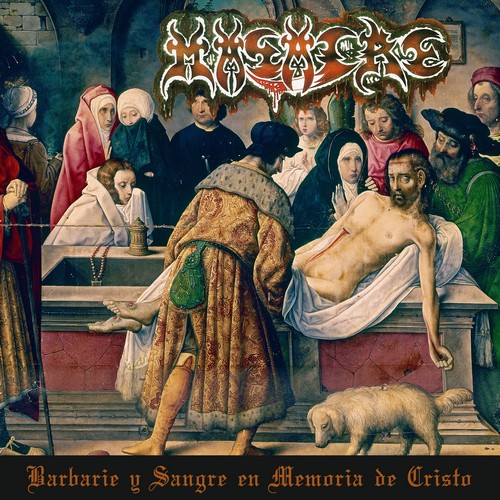 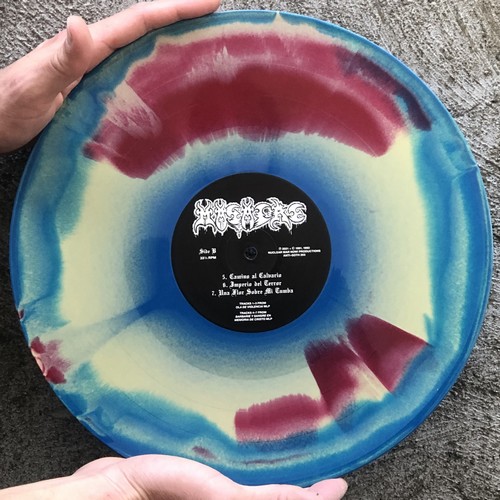 -160 gram vinyl LP, 3mm spine jackets printed on thicker stock, 12″ x 24″ gatefold insert printed on uncoated stock.
-First 80 orders will receive the tri-colored vinyl. Anyone who complains about getting black vinyl will be exposed as a poser!

(Description by C. Conrad)
For the past 25 years, Masacre have been among the most championed bands in the Medellin, Colombia Death Metal underground. After releasing several demos in the late 1980’s the band focused its sound into the cataclysmic masterpiece known as “Ola De Violencia.” This EP, recorded and released by the band in 1991 has for decades stood as a powerful testament to the potential for the oppressive darkness and massive power inherent in Death Metal. The three tracks on this EP reveal Masacre’s penchant for devastating and brooding riffs infused with melancholic passages that accentuate the morose atmosphere the band captures. Without warning, however, Masacre frequently erupt into violent blasts of evil, unleashing torrents of hate and aggression heralding the arrival of the more sinister Black Metal sound that was then beginning to cast its shadow across the metal underground. “Ola De Violencia” was far ahead of its time when it was released, but initially was almost unknown outside of Colombia until Osmose reissued the tracks on a split with Profanatica in 1992. After releasing their debut LP, “Requiem,” in 1991, Masacre returned in 1993 and unleashed the “Barbarie y Sangre en Memoria de Cristo” mLP. With that mLP Masacre refined their approach, tightening the production and adding greater dimension and technicality to the songs without sacrificing any of the brutality. These two releases exemplify what may arguably be characterized as perfect Death Metal production. These recordings cannot rightfully be described as highly produced, but neither can they be called raw or primitive. The recording quality suits the bestial and violent cacophony of sound in the more ferocious parts while simultaneously allowing for the technical and melodic elements of the band’s style to emerge out of the dense roar of chaos when necessary. The depth of low-end bass is expertly offset by the mid range guitars, and the percussion is often utilized instrumentally rather than a mere mechanism for keeping time. The vocals, slightly affected with reverb, are controlled and savage – demonstrating intentionality in the placement and execution. The songs also feature occasional bursts of the razor-like, harsh high end guitar sound that is often the centerpiece of so much South American and particularly Colombian metal as well as strategic use of organs and keyboards to enhance the macabre element within the music. What really contributes to the success of these recordings is Masacre’s exceptional ability to merge rabid hostility, atmospheric darkness, and stylistic technicality. One would not be faulted for suggesting the possibility that no other band so masterfully achieved this goal in that era of Death Metal.

Posted on May 11th, 2021
Written by Insulter
Filed under Uncategorized