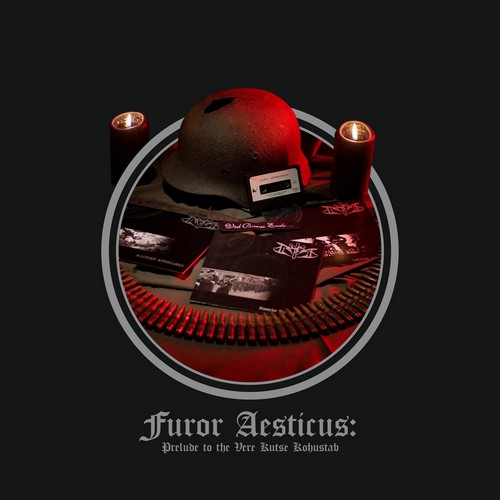 (Description by J. Campbell)
Following last year’s reissues of Loits’ first two full-length LPs, NWN! now presents the band’s “Furor Aesticus” compilation on vinyl for the first time. Originally self-released on CDr, in 2004, and repressed earlier this year on CD (with two bonus tracks) by Those Opposed Records, this record compiles Loits’ 7” trilogy. The material on these three EPs—“Legion Estland,” “Meeste Muusika,” and “Raiugem Ruunideks”—was recorded after the debut album, during the time leading up to the release of the monumental “Vere Kutse Kohustab” LP. Comprised of seven original tracks and one cover (by Estonian black metal contermporaries, Tharaphita), one can hear in these recordings the stylistic progression of the band between the first two albums, as Loits came to define their unique “Militant Flak ‘N’ Roll” style: a fusion of traditional black metal melody and aesthetics with the rebellious vigor of rock ‘n’ roll and punk. Like nearly all of the band’s output from the era, the songs here are suffused with fervent Estonian pride and recount, in historical terms, the resistance to Soviet occupation, extolling the virtues of war and lamenting the turmoil of combat. In addition to the songs collected from the EPs, this LP features the two bonus cover songs from the official CD edition. These tracks, on which Loits convincingly try their hands at stylistically disparate songs by legendary Estonian punk outfit, JMKE, and avant garde black metal pioneers, Ved Buens Ende, offer added insight into the converging streams of influence that gave rise to Loits’ sound.

Posted on November 24th, 2020
Written by Insulter
Filed under Uncategorized