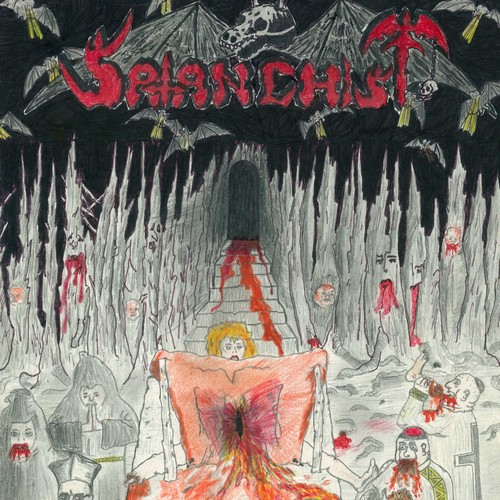 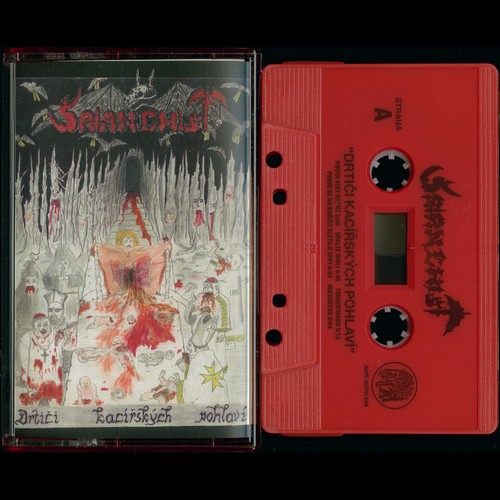 (Description by J. Campbell)
Among the more curious entries in the annals of underground Czech black metal obscurities is Satanchist. Czech extreme metal from the late 80s and early 90s always had an elusive, indescribable character; prominent bands like Root, Master’s Hammer, and Torr produced a body of work that avoided adherence to formula. Though unknown compared with the aforementioned bands, Satanchist left an eccentric mark of their own. Formed in 1989—the same year that Communist Czechoslovakia dissolved amid the so-called “Velvet Revolution,” giving rise to the Czech Republic—Satanchist began as a duo playing blackened grind metal. Over the next three years, guitarist Tomas Torquemada and drummer Pavel Slayer Tyrol (accompanied by a bassist known simply as “Stanley”) recorded a handful of demos, none of which were ever officially released. By 1992, Pavel had left the band, replaced by a drummer named “Zombie,” who brought with him a guitarist called Drtič řitních věnců (which translates to the crude and absurd phrase “anal wreath crusher”). With this lineup, Satanchist recorded the “Drtiči Kacířských Pohlaví” demo, the band’s only official release (though Tomas Torquemada continued producing music under the name Hermafrodit following the dissolution of Satanchist). The demo fell between the cracks of the burgeoning black metal movement, it’s physical obscurity and unconventional stylistic approach rendering it largely inaccessible until it was unearthed for a vinyl reissue in 2013 by the Slovakian label Hexencave Productions. Notwithstanding that well-executed reissue, “Drtiči Kacířských Pohlaví” has not received the acclaim it rightfully deserves. Satanchist’s sound was undeniably unique—an unorthodox amalgam of death and thrash metal riffs, adorned with rudimentary guitar solos, and guttural death metal vocals. Satanchist recorded “Drtiči Kacířských Pohlaví” mostly live to reel to reel tape in their rehearsal space, and the production quality of the demo strikes a perfect balance, achieving a clear analogue recording without clearing away gritty imperfections that enhance the character of the music. Lyrically, the band was violently anti-religious, a trait that ultimately led the band members to part ways, as Drtič found Tomas’s subject matter and ideology discomfiting. To tie the release together, Tomas drew a primitive interpretation of The Great Inquisitor Torquemada, a notorious 13th century Dominican friar remembered for his use of extreme torture during the Spanish Inquisition. Although the original demo cover was black and white causing the artwork to be nearly indiscernible, the vinyl reissues have preserved the color and fidelity and, thus, the brutality of the original artwork. Tomas’s illustration, however, was a far cry from Goya. Rather, it was a childish drawing depicting a disemboweled woman with mutilated babies strewn about her. The cover is deceptively simplistic, giving the false impression that the music is some sort of banal, adolescent gore grind, but that isn’t the case. After the demo came out, Satanchist played a handful of local shows before disbanding, and the remarkable demo recording remained largely lost to the decaying processes of memory and time. It’s time to revisit and reevaluate this excellent recording, and this reissue from NWN! will hopefully deliver it to a broader audience and solidify Satanchist’s legacy.

LP version will be out around April-May.

Posted on February 25th, 2021
Written by Insulter
Filed under Uncategorized