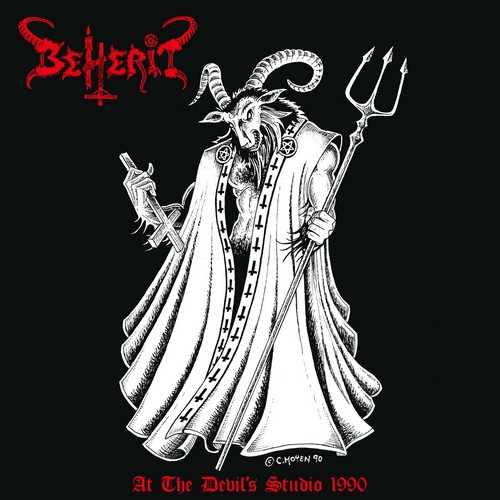 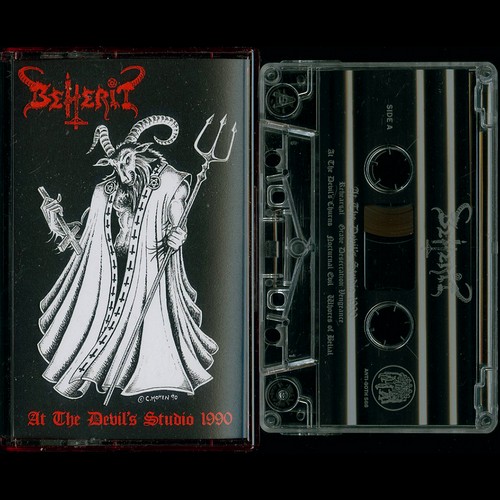 (Description by J. Campbell)
1990 was an extraordinarily prolific year for Beherit, who were still just teenagers at the time and had only been playing music together for a few months. That year they released three demos, catching the attention of the fledgling German label Shithouse Records, which released Beherit’s “Dawn of Satan’s Millennium” pic disc EP later that same year. Shithouse, which later became Turbo Music, commissioned the band’s debut album, but a dispute between band and label ultimately led Turbo to release a compilation, instead, under the name “The Oath of Black Blood”. A proper debut album would not appear until 1993, with the release of “Drawing Down the Moon”. However, Beherit did enter the studio in 1990 with the intention of recording an album, but it was discarded and the tapes went missing until 2011 when drummer Sodomatic Slaughter unearthed them for release. While its historic value is undeniable, “At the Devil’s Studio” is a remarkable recording in its own right. Like Beherit’s other pre-DDTM recordings, “At the Devil’s Studio” is a visceral explosion of bestial carnage. In fact, most of the tracks here are re-recorded versions of songs from the “Demonomancy” demo or else earlier renderings of tracks that appeared on the “Down There…” demo released in 1991 under the name The Lord Diabolus. There are three songs (“At the Devil’s Churns,” “Whores of Belial,” and the instrumental rehearsal track that opens the album) that don’t appear elsewhere in the Beherit catalog. With clearer production than the “Demonomancy” demo that preceded it, “At the Devil’s Studio” is in some respects a stronger recording, more in line with the band’s subsequent output though still possessed of the same frenzied aggression that defined the early Beherit releases. After its initial release in 2011, “At the Devil’s Studio” has remained out of print. Following on the heels NWN!’s recent reissue of “The Oath of Black Blood” 30 years after its original release, NWN! is honored to reissue “At the Devil’s Studio” in its 10th anniversary year.

Posted on September 17th, 2021
Written by Insulter
Filed under Uncategorized