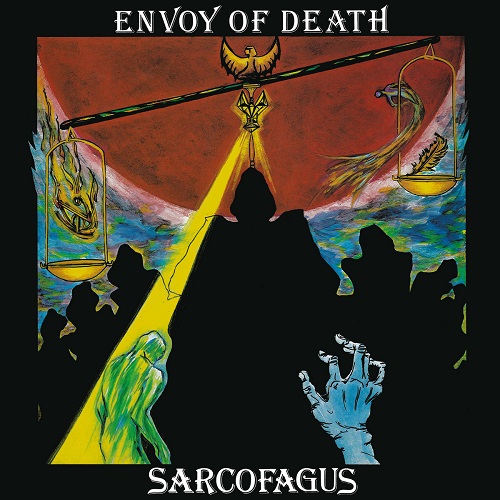 (Description by C. Conrad)
Although Britain is rightfully credited for the historic effect that its heavy metal scene of the late 1970s and early 1980s had on the genre as a whole, the significance of a scene that was developing at the same time to its northeast should not be overlooked. In Sweden, for example, bands like Heavy Load, Gotham City, and Mercy were beginning to establish themselves. Similarly, in Sweden’s neighbor to the east, a group named Sarcofagus emerged as Finland’s first heavy metal band under the primary direction of Kimmo Kuusniemi. Sarcofagus first released the “Go to Hell / All Those Lies” single in 1979, and then quickly released its first two albums in 1980, the very same year in which Iron Maiden released its self-titled debut. The first of these recordings, “Cycle of Life,” provided evidence of a talented group that was on the brink of fully defining itself. While it is a worthy accomplishment in its own right, “Cycle of Life” was to be overshadowed by its imminent successor, “Envoy of Death.” Over the span of its first three recordings, Sarcofagus underwent a few lineup changes, which culminated in the quintet of Kuusniemi (guitars), Juha Kiminki (bass), Ari-Pekka Roitto (drums), Esa Kotilainen (keyboards), and Hannu Leidén (vocals) on the second album. Following the “Go to Hell / All Those Lies” single, the addition of Kotilainen, one of the most accomplished keyboardists in all of Finland, proved to be of essential significance to the band’s climactic sound, which had fully developed by the time the second album was recorded. Although it is heavy metal at its core, “Envoy of Death” also exudes elements of heavy psych, which are often expressed in the atmospheres created by the keyboard passages and the twisted, effect-laden guitar leads. While this sound is easily observed by even the most casual listener, what is perhaps more elusive is the thematic concept that frames the album and gives purpose to each song. “Envoy of Death” narrates the story of six lives that have followed their own unique paths to their ultimate conclusions and now face final judgment. The opening/title track introduces the listener to the trial, and each of the six ensuing tracks recounts the life and death of one of the “defendants,” whose fate is soon to be determined. As a longtime fan of Sarcofagus, and “Envoy of Death” in particular, Nuclear War Now! is honored to reissue this masterpiece of pioneering Finnish heavy metal, which shall serve to remind us of our own black contracts, whose fulfillment awaits us at our pending demise.

Posted on May 10th, 2021
Written by Insulter
Filed under Uncategorized