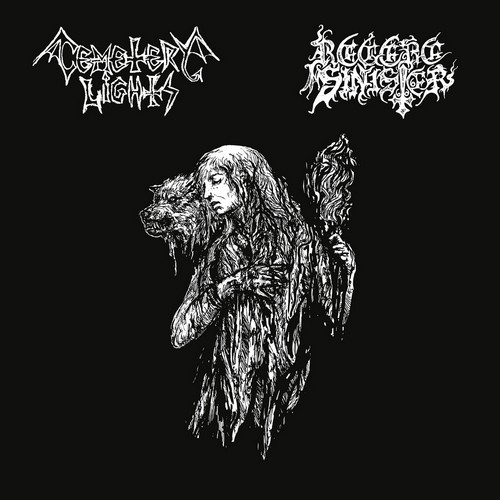 (Description by P. Lautensleger)
In the storied tradition of iconic black metal split LPs, Nuclear War Now! Productions announces the bleak communion of CEMETERY LIGHTS and REGERE SINISTER. These two entities occupy strange and uncharted positions in their respective musical paradigms. CEMETERY LIGHTS continues the occult campaign established in its arcane discography, melding primeval black doom with a truly disquieting atmosphere that invokes a sense of horror akin to the works of Thomas Ligotti. Candlelit guitars and deliberately intoned vocals transport the listener to the beyond, accompanied by a musical sensibility with precedents in the work of NECROMANTIA and MORTUARY DRAPE. REGERE SINISTER crawl from the coldest reaches of Finland to ooze their filth into our collective headspace. Cruel plodding poetry dripping with icy synthetic mania sets the stage for these blasphemous hymns. That both members have spent time in RIDE FOR REVENGE should come as no surprise, as these works suggest an affinity with the aforementioned horde and the dark traditions of their Finnish predecessors. This is a truly singular work in the annals of modern black metal, and one that should not go unnoticed by those literate in the dark arts.