Released by Nomad Snakepit Productions and officially distributed in the USA by NWN: 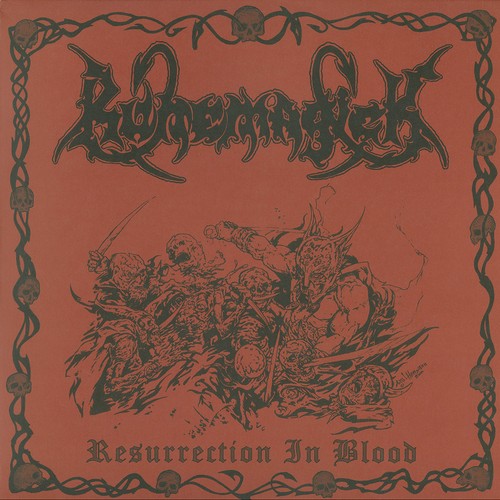 No one can ignore the weight of Swedish masters Runemagick within the obscure Death Metal scene. Having started it activity in ’91, and after a respectable number of demo’s, 1998 marked the release of Runemagick’s debut album.
“Resurrection in Blood” is their 3rd full-length album, having originally been released on CD through Century Media in the year 2000.
This milestone perfectly showcases the unconventional beast that Runemagick actually is, existing in a parallel dark universe of its own, far away from the mainstream masses!

Thirteen tracks, spread over a 50 minute maelstrom of utter darkness is what we present you this time. So leave your clinical Death Metal releases behind and embrace what REAL DEATH METAL should always sound like!! This is the stuff!! It breathes old-school foulness in every note, it surprises with unexpected hooks, it drags you down, violently shakes you around, fills your mouth with dirt and leaves you asking for more. What else do you need??!

Posted on August 18th, 2021
Written by Insulter
Filed under Uncategorized