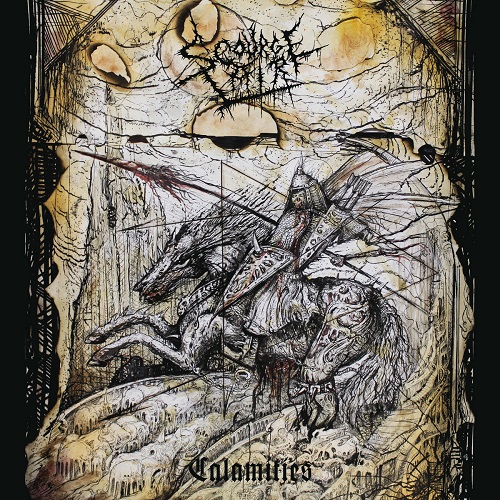 (Description by C. Conrad)
Nuclear War Now! is honored to announce the upcoming release of the debut full-length from Scourge Lair, succinctly and effectively entitled “Calamities.” Scourge Lair emerged from the hallowed metal grounds of Tampere, Finland in 2014. By 2017, the band had recorded and released its first demo, “Abominable Entities,” on digital and limited cassette formats. Approximately two years later, its second demo, “One Hundred Eyes One Hundred Arms,” was released in the same inauspicious manner as its predecessor. The quality and promise of these recordings caught Nuclear War Now’s attention, and the label saw fit to reissue both cassettes in February 2021. The sound unleashed on each – a furious amalgam of black and death metal – has now evolved to a point at which its brilliance can no longer be overlooked. Like its preceding demos, “Calamities” is born as a composite of the band’s primary influences, which perhaps most notably include the likes of Demoncy, Autopsy, Bathory, Darkthrone, and Goatlord. However, as one would hope from a first album, “Calamities” inherits the formula of songwriting and musicianship established on the demos and elevates it to another plane. Tempos tend to inhabit the higher end of the spectrum, and songs are not content to be constrained below the five-minute threshold. Instead, they often opt to push several minutes beyond, yet they do so without ever leaving a moment to dull the listener’s attention. The darkness of the album’s sound deliberately reflects this foreboding biblical divulgence:

“And I looked, and behold a pale horse: and his name that sat on him was Death, and Hell followed with him. And power was given unto them over the fourth part of the earth, to kill with sword, and with hunger, and with death, and with the beasts of the earth” (Revelations 6:8).

This passage not only capably served as a conceptual inspiration for the album, as depicted visually in the cover art, but it also reminds us of the irony of the “Christian Handbook’s” status as one of the most barbaric tomes ever penned. With this album, Scourge Lair invokes the triune of calamities wielded by all conquering Death, and thus lays waste to the masses.

Posted on March 30th, 2022
Written by Insulter
Filed under Uncategorized