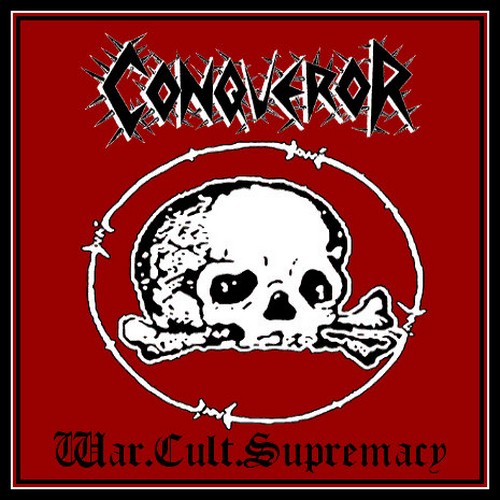 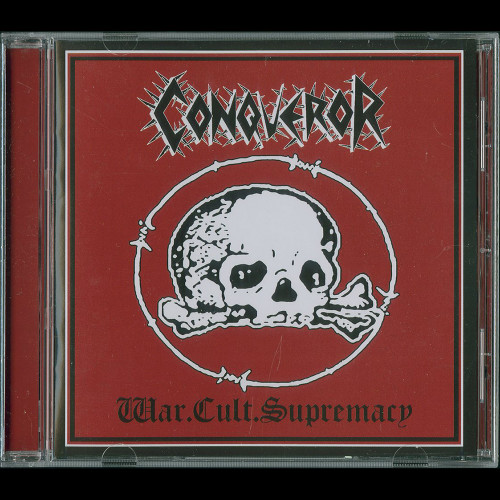 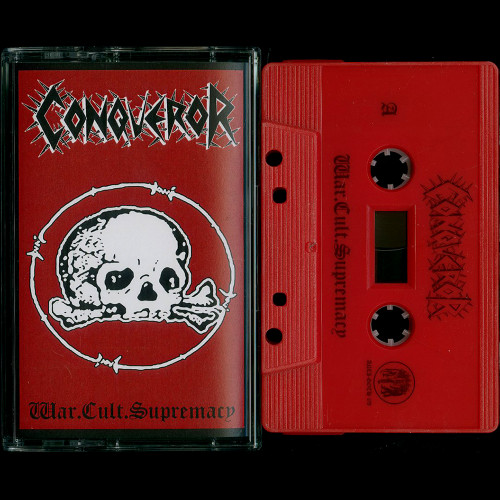 (Description by J. Campbell)
Conqueror’s campaign of devastation began with the union of J. Read (Cremation, Revenge, Axis of Advance) and R. Forster (Domini Inferi, Blasphemy). After the 1996 demo, “Antichrist Superiority,” the band turned its attention to crafting the one of the most cataclysmic and savage Black/Death records ever produced. There are few albums as genre defining as “War Cult Supremacy.” Conqueror’s work may arguably be perceived as representing one of the last major steps forward in the evolution of underground metal, with instrumentation and imagery evoking an atmosphere of endless extermination. With Conqueror, Read perfected the style of playing for which he is now revered, where the reckless attack of the drums are a focal point of the band’s sound rather than a backdrop. The horrific collision of Read’s recalcitrant percussion and vocal mayhem with Forster’s roiling guitar cultivates visions of Armageddon in which the turbid smoke of the burning dead turns the sky a deep, opaque grey and the ground is soft with the dampness of blood. The intervening years have not reduced the effect of Conqueror’s music at all—their sound and vision are arguably more relevant now than at the time when they were created, perfectly suited for the apocalyptic nightmare perpetually unfolding around us. Existence is conflict and the martial sound of Conqueror is a mode of combat unto itself. The path toward conquest; the path of the Superion. Confronting the brutal nihilistic reality of the world with warfare mysticism, seeking the nexus of arcane esotericism and the savagery of battle. 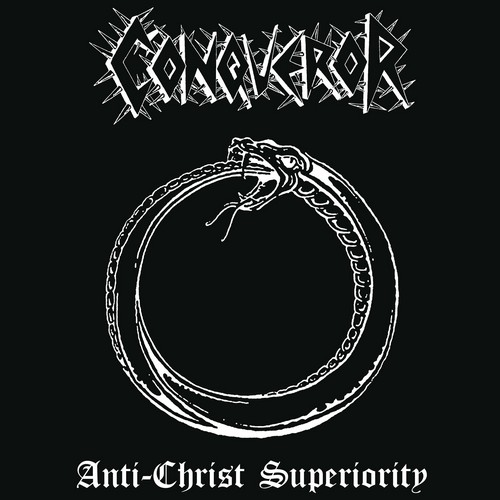 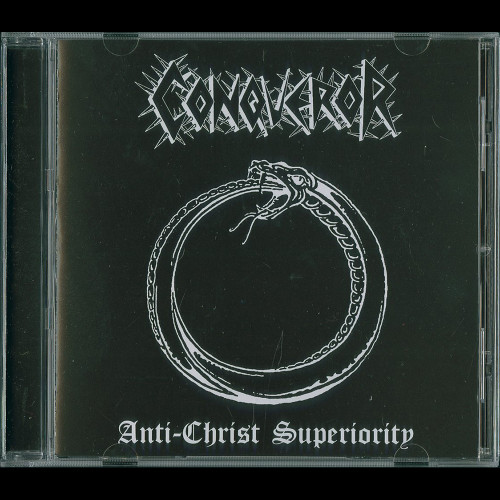 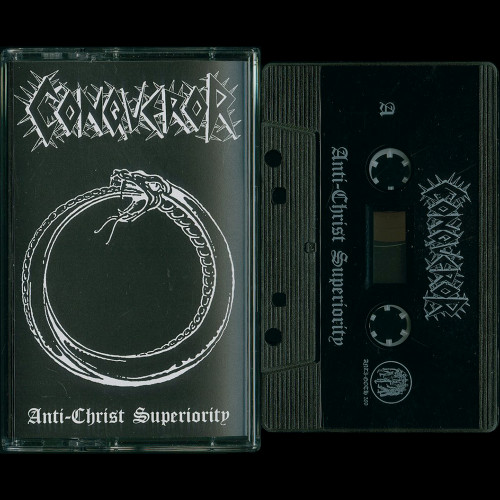 (Description by J. Campbell)
At the time of Conqueror’s formation in 1996, the duo of R. Forster and J. Read were unknown. Forster had a project called Domini Inferi with drummer Sven Cannon that released one demo in 1994, and Read was playing murky grinding death metal in Cremation. But the combination of Forster’s merciless riffs and the explosive fury of Read’s drumming produced something novel. When it was first released in 1996, Conqueror’s “Antichrist Superiority” demo presented a distinctive interpretation of Black Metal. Combining the martial superiority of Order From Chaos with the bestial Satanic ferocity of Blasphemy, Conqueror created a new breed of black metal, reflecting the next stage of its evolution and exposing new strata of extremity within the genre. 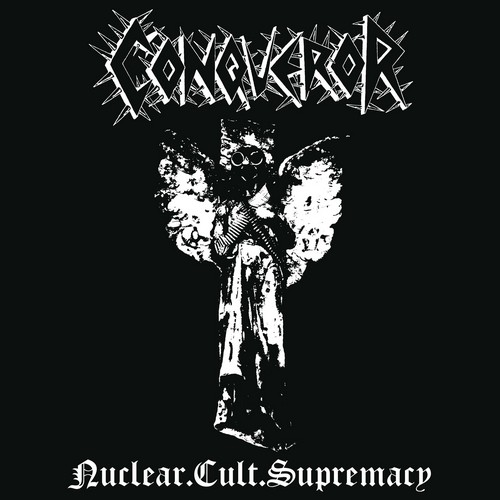 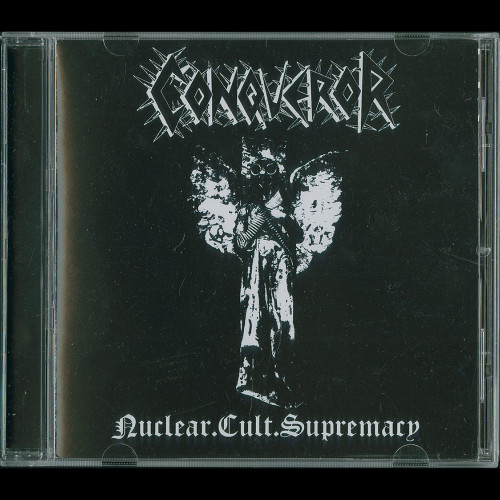 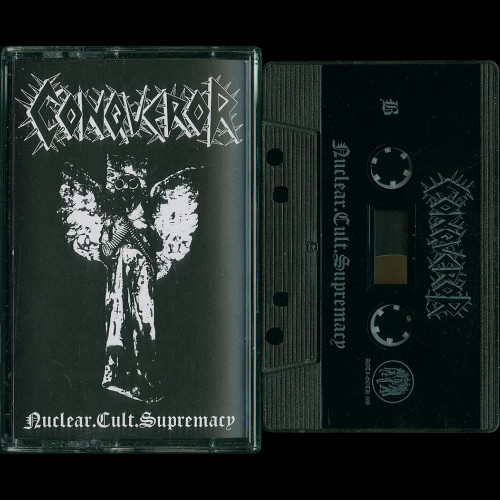 (Description by J. Campbell)
Though they only released a handful of tracks, Conqueror’s sound defined an entire subgenre of black metal. During the band’s short existence, they deliberately avoided live performance, focusing instead on perfecting their recorded output. But on November 8, 2014, at NWN! Fest IV in Berlin, Conqueror appeared on stage for the first, last, and only time. Joining J. Read and R. Forster were Revenge’s Vermin on guitar and Haasiophis on bass and vocals. The historic performance was captured on video and previously released on DVD as part of the “War Cult Supremacy” 20th anniversary reissue in 2016. The release of “Nuclear Cult Supremacy” marks the first time the audio from this performance has been decoupled from the video and mastered for release on vinyl, CD and tape to preserve this monumental event.

TS/LS/HSW/Zip HSW are also planned as part of the total onslaught.

Posted on January 24th, 2022
Written by Insulter
Filed under Uncategorized