Released in conspiracy with Heidens Hart: 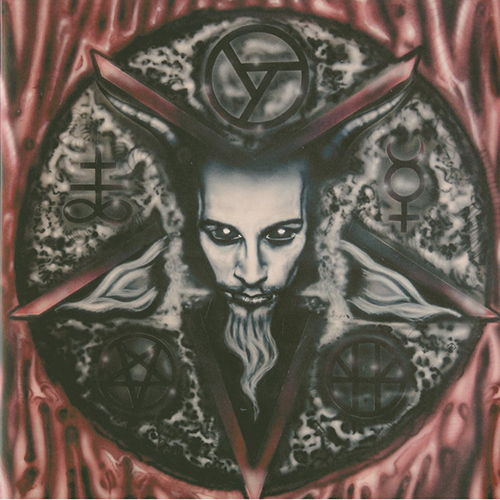 💥First press of 500 copies all on black vinyl with gatefold jacket.

(Description by J. Campbell)
Following closely on the heels of their debut full-length, “Hailstorm,” released in spring of 1995, Barathrum’s sophomore album came out later that year on the revered Nazgul’s Eyrie Productions label. Entitled “Eerie,” the album is dim and brooding, driven by the pummeling duel bass attack that defines the band’s sound at that time, with twin bass lines supplying both weight and melodic structure to the songs. Barathrum’s early albums reflect an era when black metal was still coalescing into a recognizable genre and bands felt free to explore its perimeters, experimenting and cultivating unique identities. Led by vocalist and multi-instrumentalist Demonos Sova, Barathrum established themselves at the helm of the Finnish black metal scene alongside prominent peers such as Beherit and Impaled Nazarene. For “Eerie,” Sova recruited guitarist Sulphur to play alongside bassist Infernum and drummer Pimeä, both of whom appeared on “Hailstorm.” Despite the inclusion of a full-time guitarist, the album is, like its predecessor, mostly bass-oriented. However, Sova broadened the band’s sonic spectrum on “Eerie,” writing more intricate songs in which dense, repetitive riffs wind together into concussive, mid-paced stomps and hypnotic dirges. Through the low register of the instrumentation—shorn of excessive treble due to the minimal guitar usage—Sova’s vocals, possessed and unhinged, pierce the atmosphere, saturating the tracks with unholy malevolence. Keyboards, effects, and other eccentricities punctuate the album, at times inviting comparison to Beherit’s “Drawing Down the Moon.” With “Eerie,” Barathrum achieved what so many other bands unsuccessfully attempt: maintaining a cohesive and original style while writing a diverse body of songs that each sound distinct, giving the album depth and dimension. For many, “Eerie” is the apex of the Barathrum catalog (though the band’s body of work is so vast and varied that similar arguments could be made for many of their releases). This reissue, a split release between Heidens Hart and NWN!, marks the first time this phenomenal album has been mastered for and pressed on vinyl, and features the full cover painting by J. S. Kerman., which was truncated on the earlier CD versions.

Posted on June 9th, 2022
Written by Insulter
Filed under Uncategorized