Witches Hammer “Devourer of the Dead” LP Out Now 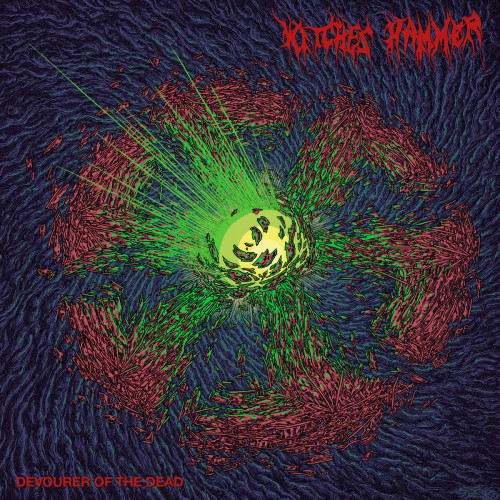 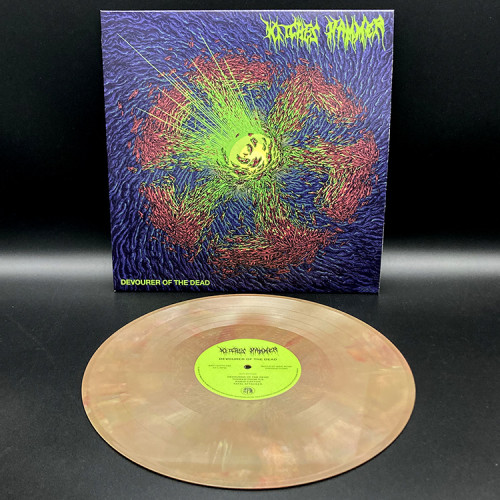 💥First pressing of 200 copies with green logo and title on the jacket.
💥All copies on cosmic collision vinyl.
💥Comes with 3mm jacket and insert.

(Description by C. Conrad)
Nuclear War Now! is proud to continue its longstanding allegiance with the legendary Witches Hammer with the release of “Devourer of the Dead,” the band’s second full-length album in as many years. Originally active in the fertile extreme metal scene of British Columbia during the second half of the 1980s, Witches Hammer developed its brand of Canadian speed metal during the same era and in the same place as such greats as Blasphemy and Procreation. That said, its initial period of activity, which ended in 1990, passed without the recording of a proper album. Instead, it resulted in what some might consider unfulfilled promise, with the release of three demo cassettes and a twelve-inch mini-LP. Almost thirty years later, original members Marco Banco (guitars) and Rayy Crude (vocals) decided to resurrect the band, which culminated in the 2020 release of its debut album, “Damnation is My Salvation.” This recording proved that Witches Hammer’s intervening dormancy had done nothing to dull the blistering speed metal attack that had been so brilliantly pioneered decades earlier. Now, a little over one year later, the release of “Devourer of the Dead” reconfirms the band’s strict adherence to its dogma of no compromise, no trends, and no fashion. Indeed, aside from the added clarity of an enhanced production level, “Devourer…” is a fruit of the same wicked root that burrowed its way insidiously into the Vancouver-area underground more than a generation ago. Composed of five brand-new tracks and three newly-recorded demo tracks from the band’s original inception, this album bridges two eras of speed metal perfection with its breakneck tempos and the scalpel-like precision of its demonstrated musicianship. All told, “Devourer of the Dead” promises not to disappoint Witches Hammer fans, both old and new alike.

Posted on May 29th, 2022
Written by Insulter
Filed under Uncategorized