Goatlord “Reflections of the Solstice” LP Out Now 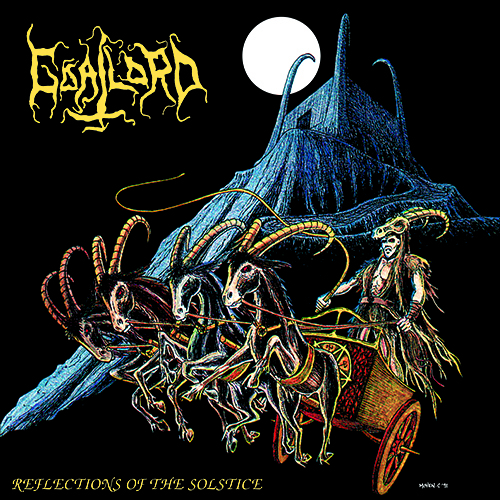 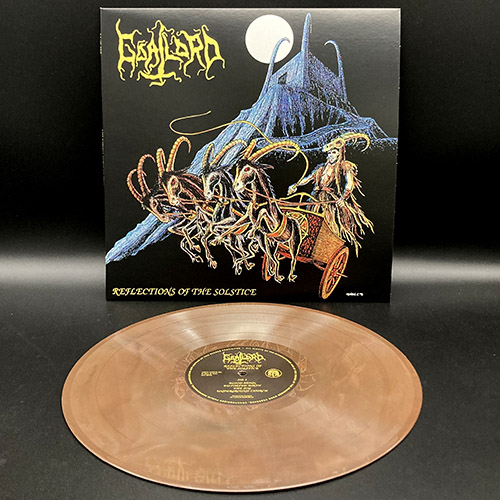 -Repress of the debut album with a new layout and full color cover.
-Pressing of 200 copies on randomly colored vinyl (mostly brown).
-Comes with 3mm jacket and 12″ insert.

(Description by C. Conrad)
The transition in style that Goatlord underwent between the releases of “Demo ’87” and the “Sodomize the Goat” demo in 1988 began to expose some differences in the individual members’ visions for the band’s future direction. Although guitarist Joe Frankulin has been quoted as stating that the deliberate attempt to slow the pace of certain sections of the songs quite dramatically had gone a bit too far, vocalist Ace Still instead embraced this change wholeheartedly, which eventually led to him parting ways with Goatlord prior to the band’s signing with Turbo Music for the recording of their first album, “Reflections of the Solstice,” in 1991. In the wake of Ace’s departure, Frankulin and company enlisted the vocal services of Mitch Harris, who would soon become better known for his involvement in Napalm Death. Curiously, although it is commonly recognized that Harris indeed recorded lead vocal tracks for the entire album, it is instead the voice of Ace Still that appears on the released recording. Given the band’s known indulgence in hallucinogenics, it is as fitting as it is mysterious that Ace Still somehow re-emerged from the fog to record the lead vocal tracks on “Reflections…,” and it is perhaps equally interesting to note that Harris’ vocals only surface as a backing track on “Sacrifice.” These differences in musical visions aside, “Reflections of the Solstice” followed much in the same vein as the “Sodomize the Goat” demo. In fact, every song on the album had also been previously recorded for the 1988 demo, and the band continued to masterfully fuse frenetically-paced death/thrash segments with more tortured, black/doom dirges. On the other hand, at least one noteworthy alteration was made to one song’s composition – namely, the extended delay-and-reverb-enhanced intro that was added to “Possessed Soldiers of War.” Moreover, the most significant difference that is pervasive throughout the album is the seemingly inexplicable use of an electronic drum kit, which adds to “Reflections…” a modern and technical element that was clearly not present on previous recordings. Notwithstanding the fact that over the years some have unfairly criticized this particular aspect of the album, the unnatural sound of the drums should instead be considered and appreciated as yet another bizarre anecdote in the band’s development, which simply adds another important dimension to Goatlord’s historic significance. Following the album’s initial 1991 European release by Turbo Music, the U.S.-based label JL America licensed a version for the North American market the following year, albeit with different cover artwork and one additional track, and for some reason decided to rename it “Goatlord.” Fifteen years later, Nuclear War Now! rightly decided to resurrect this masterpiece in order to ensure its continued proliferation. Now, as it was first proud to do in 2007, Nuclear War Now! once again offers a re-release of “Reflections of the Solstice,” as part of its recently coordinated and comprehensive effort to cement Goatlord’s legacy as one of the most important and unique bands to ever defile all that is considered sacred.