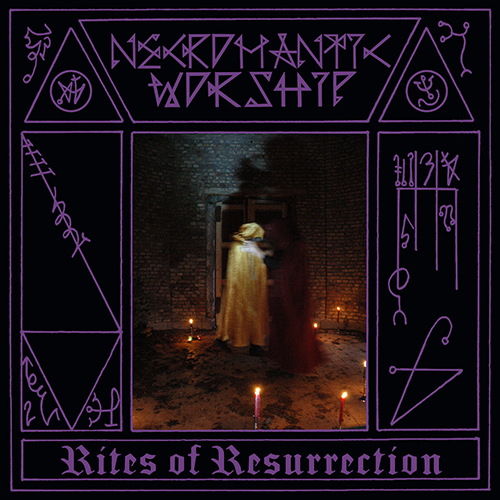 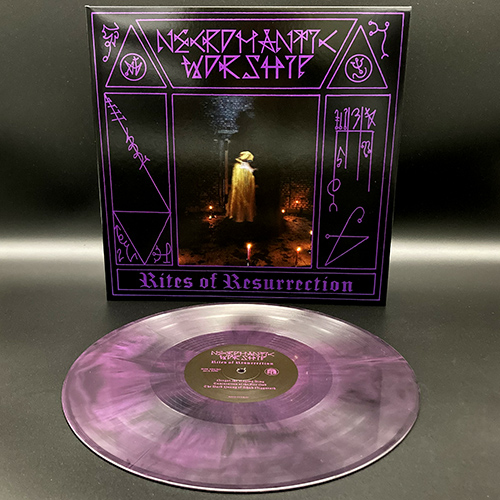 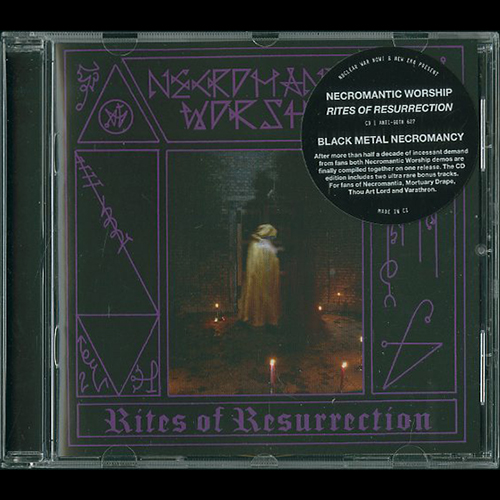 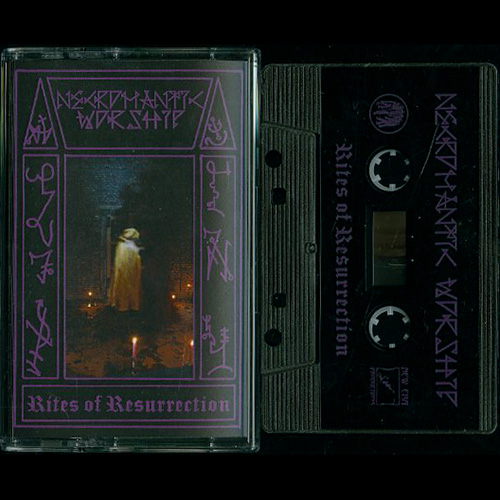 -A compilation release consisting of both demos from 2015 and 2016.
-160 gram vinyl with Gatefold jacket, 12″ insert.
-Die hard version violet/black marble vinyl with woven patch, sticker, A4 interview sheet, and a short story written by Ghûllzaraën.
-CD version with exclusive bonus tracks.
-Released in conspiracy with New Era Productions. Europeans should order this release from New Era to save on shipping and VAT.

(Descriptions by C. Conrad)
“The Calling” Demo 2016: With its 2015 debut demo, “Spirit of the Entrance unto Death,” Necromantic Worship firmly established itself as a worthy successor to the ancient Greek gods of black metal. Having first re-conjured the evil spirit of the great Necromantia and their brethren with this three-song offering, Necromantic Worship now returns a mere several months later with its second demo, “The Calling…,” which continues in the same arcane spirit as the first, while adding new elements which serve to yield an even greater result. Still enshrouded in the same occult atmosphere as the previous recording, Necromantic Worship’s newest hymns persist in being primarily driven by the locomotive effect of Ghûllzaraën’s pulsing bass lines. Unlike the debut recording, however, the bass guitar on the “The Calling…” is more perfectly bound and enhanced by the irreplaceable sound of live, organic percussion, as performed by Daemonomancer from the Canadian band, Goathammer. Additionally, the band saw fit to recruit the services of Zagan, best known as the guitarist of the legendary Countess, to further augment their archaic sound with a series of inspired, climactic guitar leads. Also unlike the first demo is the fact that the new material was written in a premeditated fashion, as opposed to being the spawn of impromptu rehearsal sessions. While the previous approach was effective in its own right, the greater amount of consideration that went into the songwriting on this release is evident in the structural complexities therein. These novelties aside, “The Calling…” is sure to be seen by admirers of the debut demo as a familiar entity, and one whose unsettling effect is in large part due to the forlorn vocals, which are performed as if they are being whispered into the listener’s ear by an otherworldly being, thus leading him to question whether the thoughts he is having are indeed his own. The possessed nature of the recording as a whole reaches its zenith at the fourth track, simply but ominously entitled “The Calling…,” which is perhaps best described as a ritual soundscape completely devoid of traditional musical elements in favor of hauntingly psychedelic atmospherics and the cackling vocal beckoning from a not-so-distant, soul-thirsty creature. Finally, and in addition to four compositions of original material, the band chose to pay homage to one of their primary muses in recording their own rendition of Necromantia’s “Faceless Gods,” a song which they have rehearsed since the band’s inception and one that perfectly suits their own creations. As with the first demo, Nuclear War Now! and New Era Productions conspire to bring “The Calling…” into the dark of night, where it is to be most appropriately worshipped by those who are willingly or involuntarily summoned.

“Spirit of the Entrance Unto Death” Demo 2015: Oftentimes the most inspired and compelling music is catalyzed through sessions of improvised experimentation, rather than as a result of premeditated composition by one or more of a band’s members. Such is the case for “Spirit of the Entrance Unto Death,” the inaugural three-song demo from Holland’s Necromantic Worship, an entity born out of improvised sessions between its two kindred constituents, Ghûllzaraën and Xarangorth. For music such as this that is so thematically and atmospherically bound to the occult, it is not surprising that the impromptu nature of its development reflects an intuitive addition of ingredients to a concocted brew, as opposed to the strict adherence to a prescribed recipe. Clearly, the most notable musical influences on this recording are those representing the ancient Greek canon of black metal – Rotting Christ, Varathron, Thou Art Lord, and especially early Necromantia. “Spirit of the Entrance Unto Death” focuses primarily on the constantly-present, pulsating, low frequencies of the bass guitar, which anchor the other musical elements to each track in the same way that gravity anchors the living body to the earth, in which rest the dead who have passed through the silver veil of darkness that separates this world from the next. Much like early Necromantia songs such as “Evil Prayers” and “De magia Veterum,” the ritualistic nature of this demo invokes an occult atmosphere that reflects the mystique and cosmic chaos of the ancient monstrous gods, who for now roam the space in between spaces, but who are simply biding their time as they await their triumphant return to once again rule the mortal world. In anticipation of this moment, and as a precursor to its release of Necromantic Worship’s debut album in the months to come, Nuclear War Now! is proud to present this demo on cassette format, as a vehicle by which the living may worship the gods of the past and future at the behest of the dead.

Posted on December 7th, 2022
Written by Insulter
Filed under Uncategorized