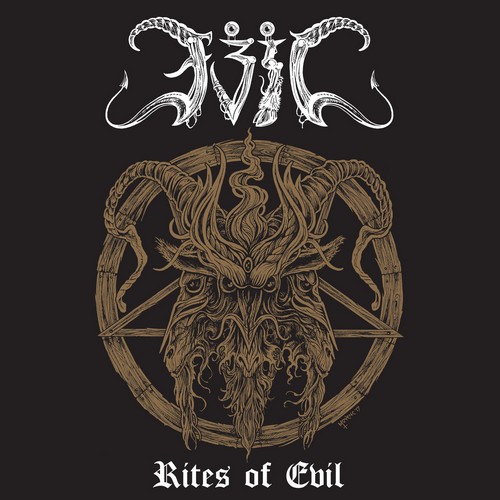 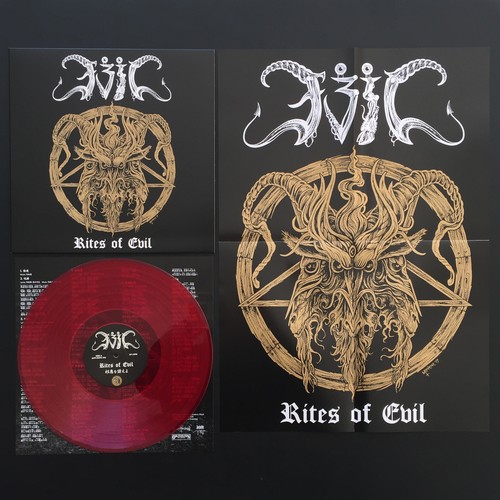 3rd pressing on red vinyl limited to 250 copies. The band will have these for sale during their upcoming tour with Bone Hunter.

(Description by C. Conrad)
Nuclear War Now! expands its ever-growing roster and reach with its release of “Rites of Evil,” the debut full-length from Evil, a four-piece black/speed metal band from Tokyo, Japan. Although the band has existed since 2011 and has previously released two demos and a split CD, its output to this point has been largely overlooked. With “Rites of Evil,” however, its profile is rightfully promised to rise from the obscurity that is due at least in part to its geographic isolation. Including venerable bands such as Bathory, Hellhammer and Slayer in its list of prominent influences that in all span at least three continents and various subsets of first-wave black metal and satanic speed metal, the ones that shine through the most are early Sodom, Sarcofago, and fellow compatriots Sabbat and a certain, notorious Japanese punk metal band. The comparison to Sabbat is notable immediately with the intro riff to “除夜 Nightmare Bells (Joya),” which is similar in its composition and function to the iconic riff in “Welcome to Sabbat” that opens the “Desecration” EP. More generally, Evil’s approach to writing and performing escapes the more modern black metal trend of writing riffs that are oftentimes indiscernible through the wall of noise and/or effects that envelopes them. Instead, the riffs on “Rites of Evil” are clear and memorable, harkening back to Sodom’s early period, when albums like “Obsessed by Cruelty” borrowed and combined aspects of the prototypical strains of black and thrash metal that were first pioneered by the likes of Bathory and Slayer, respectively. Unlike what many contemporary black metal fans would narrowly consider to fall under that subgenre’s umbrella, Evil’s interpretation of the style abounds in impressive guitar leads and solos, which reflect a level of musicianship that is oftentimes lacking in the plethora of bands that briefly surface on and then disappear from today’s black metal landscape. Additionally, Evil’s music is peppered with a healthy dose of ingredients adopted from the recipe of old Brazilian deathcore and its primary progenitor, Sarcofago. An example most reflective of this inspiration is “曼荼羅 Mandala (Mandala),” the Japanese equivalent of a song that could otherwise be easily mistaken as a lost track from Sarcofago’s “I.N.R.I.” recording sessions. Replete with borderline chaotically-executed percussion, rhythmically-barked vocals and the occasional banshee cry so representative of that scene’s output, this song is clearly a reverent nod to the great Minas-Gerais scene of the mid-to-late 1980s. Finally, but not insignificantly, Ryo “Asura” Kitamura’s vocal style is very similar to that of the aforementioned Japanese hardcore legends, and the reliance on his native Japanese language in the lyrics adds a touch of authenticity and prevents the awkward musical caricature that often results when Japanese metal bands opt for English lyrics with a starkly Japanese accent in their delivery. Having toiled in the shadows to prepare this black metal Molotov cocktail, Evil is eager to unleash its fury on the largely unsuspecting masses.

Posted on January 22nd, 2019
Written by Insulter
Filed under Uncategorized