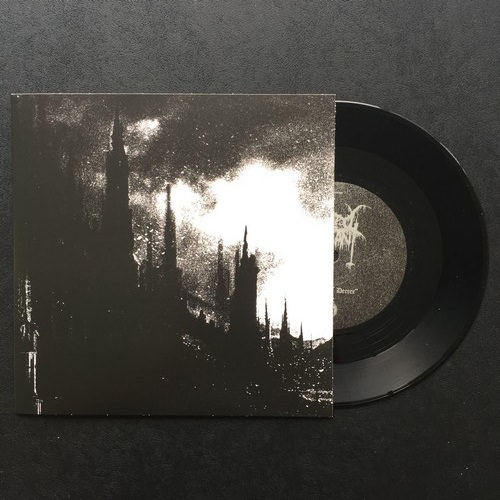 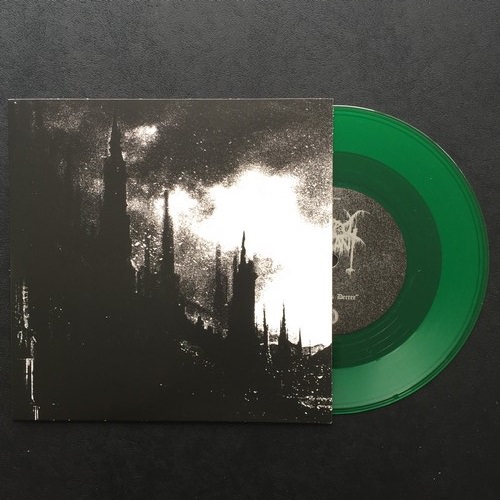 (Description by J. Campbell)
This split 7” showcases two similarly promising bands in the vanguard of the current Black Metal scene. Following the release of a superb demo on Tour De Garde six years ago, Departure Chandelier fell silent. This split release with Blood Tyrant (which released its exceptional debut album on Iron Bonehead last year) signifies the band’s return and foreshadows the upcoming full-length album soon to be released on NWN!. Featuring members of Akitsa and Ash Pool, Departure Chandelier explores the gilded savagery of the Napoleonic Wars in a musical style that is both militaristic and melodically ornate. Built around a succession of enthralling riffs perfectly stitched together and accentuated with unexpected tempo shifts and the well-placed use of keyboards, Departure Chandelier’s side is a bold example of the band’s union of its particularized sound and unique subject matter. The tyranny of Napoleon, his bloody path of conquest, and his near apotheosis are, in many ways, thematically similar to the immortal evil and vampyric elitism at the heart of Blood Tyrant’s creation. Whereas Departure Chandelier’s track is visceral and physical, Blood Tyrant’s contribution is more incorporeal and diaphanous. Blood Tyrant’s “The Dark Decree” displays the band’s reverence for tradition, harkening back to Black Metal of the 1990s, draping frigid and melancholic riffs in a dense fog through which cut the vampyric shrills of the vocals. The delicate use of keyboards, woven almost indistinguishably with the guitars and blurring the edges of the melodies, accentuates the atmospheric effect of the track. Presented in tandem, each side balances and bolsters the other such that the tracks on this split release embody the essence of both bands. Importantly, the ideas conveyed by Departure Chandelier and Blood Tyrant are complementary, not redundant, and the distinct nature of each band allows for welcome stylistic differences in their respective approaches that lend to the success of this split release.

Available in green and black vinyl.

Posted on November 3rd, 2017
Written by Insulter
Filed under Uncategorized