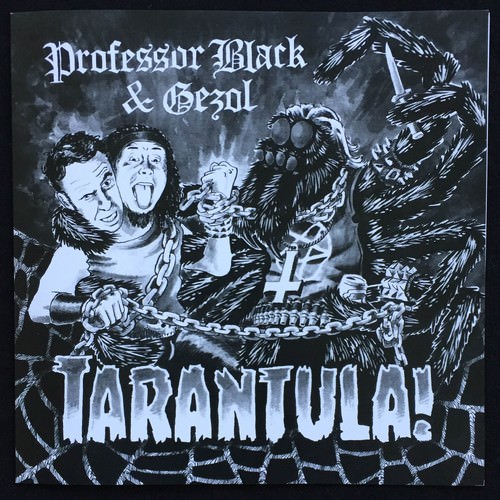 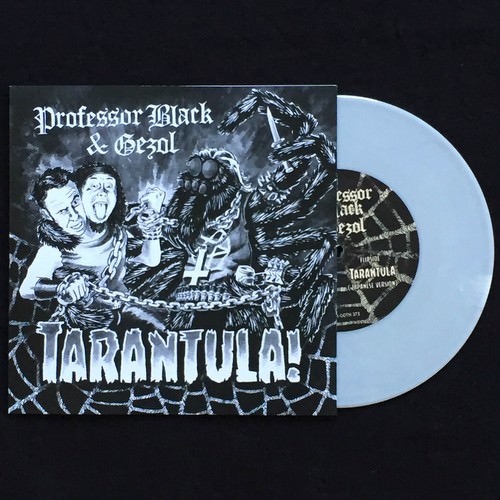 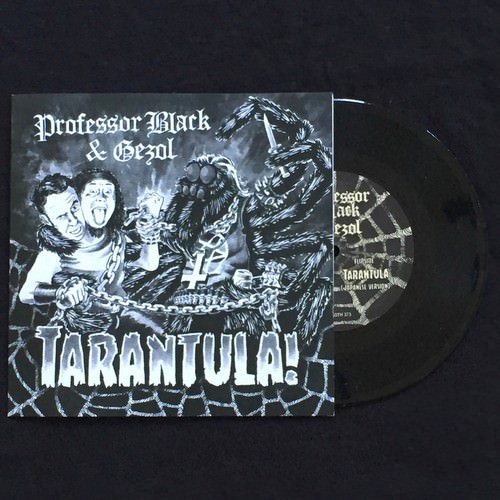 (Description by C. Conrad)
Nuclear War Now! is proud to announce the release of the “Tarantula” seven-inch single, a collaboration between Chris “Professor” Black and Gezol, two highly-respected and venerable musicians in the metal underground. Originally envisioned to be one installment in a series of singles and later reimagined to become a single track on a Professor Black solo album featuring several different vocalists, the impetus for this pairing dates back many years. Gezol had already been considered a musical hero to the Professor when the two first shared a stage in 2003, with the former playing in Metalucifer and Sabbat and the latter in Superchrist for the Japanese legends’ first U.S. shows. Gezol and the Professor kept in touch over the years since and were later reunited on stage in 2014 when Professor Black played session bass for two gigs with Metalucifer. Given his admiration for Gezol’s body of work, the Professor then naturally decided to ask Gezol to record a song for the aforementioned solo album. Gezol accepted the offer and was the first of the invited vocalists to submit his contribution.
Although the idea for the solo album was never fully realized, this collaboration between Professor Black and Gezol merits its release as a standalone seven-inch single. “Tarantula” was written specifically for Gezol’s vocals, which he delivers in both English and Japanese as two versions of the song, each on its own side. Professor Black had written the music and English lyrics and recorded the instruments himself during the same studio session as the High Spirits “Motivator” album. In addition to the vocal performances, Gezol spawned the idea for the Japanese version and wrote those lyrics. Whereas the vocal tracks serve as the only technical difference between the two versions, the Japanese rendition distinguishes itself from the English version in its increased level of aggression and a resulting difference in atmosphere. Both versions, however, are equally potent exemplars of speed metal and pair perfectly for release in this particular format. The cover art was provided by damhair, whose style is recognizable from its regular appearance in Isten zine between the 1990s and the present. The end result of this collaboration is one that represents and celebrates the dedication to their craft that both Professor Black and Gezol have demonstrated through their collective bodies of work over the past twenty-plus years.

Posted on January 30th, 2018
Written by Insulter
Filed under Uncategorized