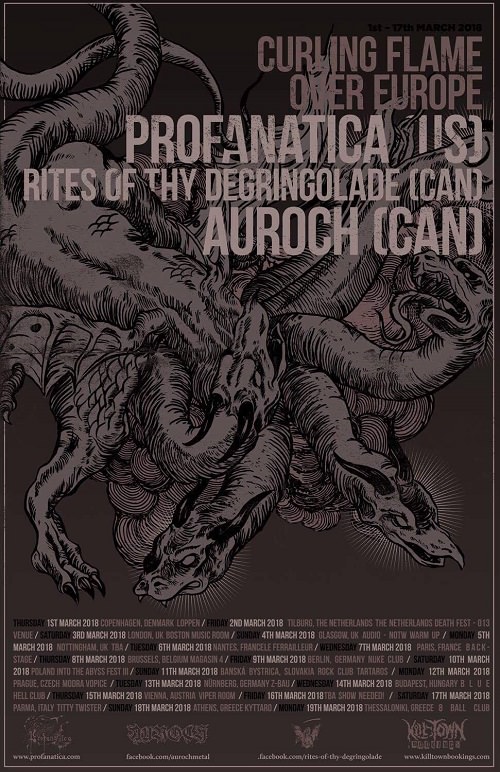 The package has been announced as part of the final line-up for Netherlands Death Fest alongside great names such as Emperor, At the Gates, Carcass, Sadistic Intent among many others! The tour will start in the north of Europe on the 1st of March and make its way down to NDF before continuing through central and East Europe, taking over Greece and finally ending up desecrating Spain and Portugal!

This will be the first European tour for Profanatica and the first time ever in Europe for Rites of thy Degringolade! Auroch toured alongside Mitochondrion and Ritual Necromancy back in 2014.

* just Profanatica (us) + Rites of thy Degringolade (can)

Legendary Profanatica was among the earliest American black metal bands to emerge in early 90´ies lead by former Incantation member Paul Ledney. Profanatica´s brand of blasphemic black metal has inspired tons of newer generations of black metal bands around the world and to this day maintains a cult legend status in the underground. Canadian Rites of thy Degringolade did three full length albums between 1999 and 2005 before disbanding on a 10 year hiatus. Their name still lingered in the underground over all these years before founding member Paulus Kressman resurrected the band again in 2015 and have since released a demo and a compilation on Nuclear War Now! Auroch is a death metal power-trioalso stemming from Canada and features members of Mitochondrion and the Covenant Collective based out of Vancouver. Auroch has been very active with live performances across North America and Europe and released 3 full lengths so far and are currently signed to Profound Lore Records.

Check the bands out here:

Posted on January 23rd, 2018
Written by Insulter
Filed under Uncategorized