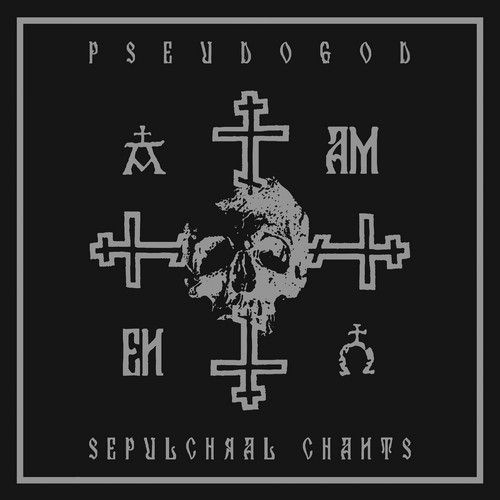 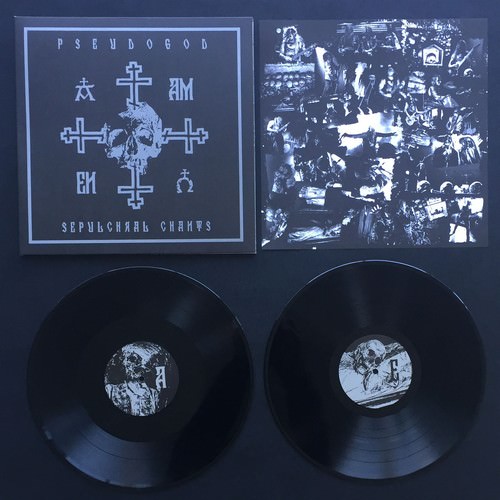 (Description by J. Campbell)
Since 2004, Russian Bestial Black Metal masters Pseudogod have been trudging through the infertile landscape of the underground, malevolent soldiers of apocalyptic ruin. Pseudogod’s output, however, has remained sparse in comparison to the band’s longevity—an effect of the tyrannical control the band has maintained over the quality of its work. Aside from the band’s 2012 full-length, “Deathwomb Catechesis,” Pseudogod has released just one demo, along with a handful of EPs, split releases, and comp tracks. The “Sepulchral Chants” compilation, originally released as a CD, in 2015, by Sekt Ov Gnozis Productions, collects all of Pseudogod’s non-album tracks. Presented in nearly chronological order, these tracks trace the steps of Pseudogod’s development, beginning with the wretched and relentless violence of the “Illusion of Salvation” demo. First released in 2006, “Illusion of Salvation” was Pseudogod’s first blasphemous proclamation. As a first release, it was virtually unparalleled among the band’s peers in the Black/Death style, and it set a high bar for Pseudogod to live up to for future releases. But any doubt that Pseudogod would be unable to surpass the demo was quickly dispelled with the 2009 split release with Blaze of Perdition. Pseudogod’s three tracks on that release (which were later released on the “Triumphus Serpentis Magni” MLP), represented a substantial step forward, and a deeper descent into the dimmest regions of the soul. Mixed and mastered by M. Żentara (MGLA), the sound is full, but severe, demonstrating the band’s stunning balance of sonic severity and precision songwriting. Pseudogod clearly possessed something that their contemporaries at the time sorely lacked; they created atmosphere but without sacrificing the melody and structure necessary for good, memorable songs. The band continued to refine this approach over the next few years on the Russian “Four Wings of Blasphemy” four-way split CD and the split 12” with Morbosidad. As it evolved, Pseudogod’s music became more immense, exhibiting a rarefied understanding of, and an unyielding devotion to, the malefic forces underlying Black Metal. This collection—released on vinyl for the first time—includes all of the tracks Pseudogod released prior to the recording of the debut album (as well as a few previously unreleased rehearsal tracks). It is a remarkably consistent body of work and remains one of the best representations of this style produced in the last 20 years.

SIDE A:
01. Bleeding With Pus Of Black Plague
02. Illusion Of Salvation

SIDE B:
01. Branded By Hornz
02. The Firstborn Of Abhorrence
03. Illusion Of Salvation

SIDE D:
01. Blood War III (ANTAEUS cover)
02. Bleeding With Pus Of Black Plague
03. The Firstborn Of Abhorrence
04. Necromancy Of The Iron Darkness
05. Azazel

Posted on April 11th, 2018
Written by Insulter
Filed under Uncategorized